Anderson, Hopi, was born in 1956 in Shungopavi Village on Second Mesa.

He was always artistic, starting with drawing and kachina carving. Beginning in 1985, he created a collection of kachina ornaments, usually introducing a new one each year in December.

For about the last five years, Anderson has been crafting Hopi overlay silver jewelry. He learned his techniques and designs from his father-in-law, Bernard Dawahoya, a master silversmith from the Snow Clan. Berna, Anderson’s wife, recalls her father’s drawing. He would take the children out to the mesas and cliffs and say, “Draw.” While the kids had no idea what to draw, Bernard would “look down very deep” and create an image of something apparently insignificant, such as bean sprout.

Anderson Koinva was inspired by that way of seeing and drawing and is carrying on the same traditional style. His work is bolder than that of other Hopi artists, and the forms are usually rounded, instead of flatter. He even gets some design ideas from the painted walls inside his family homes.

Trained as a plumber, Anderson tries to spend as much time as possible on jewelry making. He enjoys all aspects of his art, especially designing and cutting the intricate images from silver. His hallmark is a sun and snake, representing his clans.

Anderson and his wife Berna have a daughter who works as a house painter and has inherited her father and grandfather’s talents for drawing and ornamentation. Their son has lived in Italy for eight years, working as a singer in a dance group. 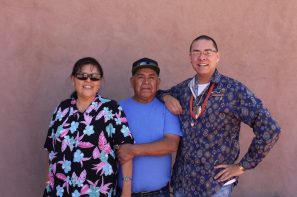