Candelaria Suazo has been making pottery for approximately 20 years. She specializes in sgrafitto two-tone pots. She gets her clay from Santa Clara Pueblo and hand-coils her pieces. After the pots have dried, she polishes them with a polishing stone and red slip. The pots are then fired outdoors in a traditional firing pit, using “cow patties” and horse manure.

Candelaria is a full-blooded Indian from Santa Clara and San Juan Pueblos. She was first inspired by her mother, Santanita Suazo and her sisters, Margie Naranjo, the late Martha Huangooah, Mae Tapia and Shirley Duran. Delores Curran and Geri Naranjo, her relatives, have also greatly influenced her work.

At the Eight Northern Pueblo Show she won several ribbons for first, second and third places. 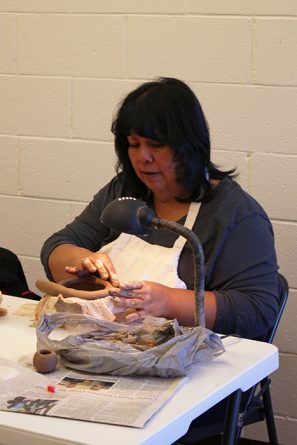