Dale was born in 1957 to Dennis and Nancy Edaakie, acknowledged masters of Zuni inlay jewelry. Dale wanted to be a still life artist, a painter in acrylics, and a muralist, never dreaming he would become a master inlayer. He attended Haskell Indian Junior College in the late ‘70s to study painting. But while home for break one year, he noticed the inlay work his brother Derrick had learned from their parents. Dale was so struck by the beauty and craftsmanship of the work that he determined to try his hand at the exacting art.

After a lot of trial and error and with advice and guidance from his father and mother, Dale learned basic techniques of cutting, grinding, soldering, and inlaying. He began by making the bird designs for which his parents were known. But the sight of a large elk standing by the side of the road inspired Dale to specialize in animal designs, which he discovered were more detailed and challenging to create. At this point in his career, Dale began to think of himself as a ‘Wildlife Artist.’

While getting established as a jeweler, Dale did other work to earn a living, including a job as a computer technician. However, after a number of Best of Show awards, he was able to make a name for himself as a master inlay jeweler. His workmanship is unsurpassed and his designs beautifully executed. The etching of his animals is done in great detail. He usually makes handmade tips for his bolos. It’s said that his pieces give the illusion of fine paintings framed in silver and gold.

Dale and his wife Jenny live in Zuni and have two daughters. 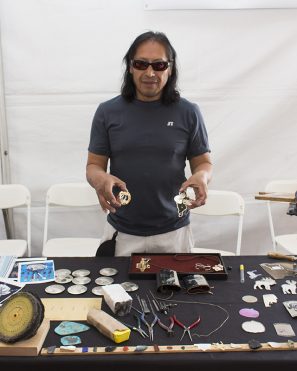