Dolores Curran is a master of the elegant miniature. Her highly polished miniature redware and blackware vases, bowls, plates, and canteens have won recognition in the Southwestern Association for Indian Arts (SWAIA)’s competitive Indian Market and are included in many private collections. Her renditions of birds, feathers, geometric and water serpent design are executed with precise and loving care.

Dolores’ family worked to bring back the Pueblo’s pottery making tradition. Her great-grandmother was a potter, and her mother, Ursulita Naranjo, knew enough of the techniques and designs to pass the tradition to younger generations. Dolores, her sister Geri Naranjo, and her brother Ervin all learned to make pottery from watching their mother. Dolores was married for over seventeen years to the late potter Alvin Curran, from San Juan Pueblo. As a result, her work, although in Santa Clara style, is influenced by San Juan design.

Richard Spivey, former president of SWAIA and an expert in the field of pottery, was a great influence in Dolores’ life. He encouraged her to keep refining her pottery designs and reminded her constantly of the importance of perfection in work such as hers.

One of Dolores’ favorite part of the creative process is painting her designs on the traditional white slip applied to the red pottery. “I love to paint. It’s very relaxing. Each stroke takes about four or five layers. I find it gives my mind time to wander. Sometimes when I finish I can’t believe I painted the whole piece. It looks different with each step.” Her pots are fired in the traditional way using cedar and pin and an outdoor firebox made of tin.

In 1980 she took three first place ribbons for her plate, water jug, and vase. These were her first ribbons, and she is especially proud of them even though she has received many others since then. Few potters win acclaim on their first entries. On May 1982, Dolores presented her work in a one-woman show at the Case Trading Post of the Wheelwright Museum.

Dolores says of her work, “What matters is expanding our creation from what our ancestors gave us.” 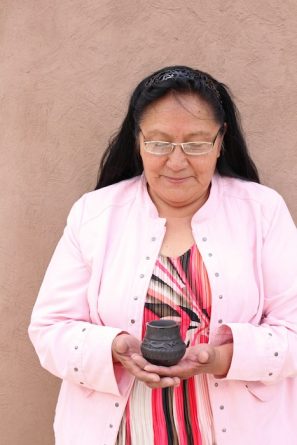