Duane Maktima has been an outstanding metalsmith for over twenty years and a major influence and mentor for many Native American artists working today. He is a complex artist whose jewelry reflects both his Hopi and Laguna descent. He also acknowledges the influences of Charles Loloma and Scandinavian design on his work.

As a boy, he learned carving, painting, and other traditional crafts from his Hopi grandfather. He entered Northern Arizona University in the early 1970s to study forestry, but later switched to a general arts program to study painting and silversmithing. In 1975 he left the University for a two-year resident artist internship at the Museum of Northern Arizona Art Institute to focus on silversmithing. When he exhibited at Santa Fe Indian Market for the first time in 1976, Duane won a first pace ribbon for his class. “Even then,” he said, “I knew the Indian silver-and-turquoise jewelry trend of the 1970s wasn’t going to last. I knew I needed to do more research into Native American history and anthropology because I wanted to make something original and innovative.”

After the internship and a brief stay at his mother’s home in Laguna Pueblo, he returned to NAU where was invited to see his classmate’s mother’s collection of Danish silver jewelry. Duane immediately gravitated toward the “clean lines, the fluidity, and asymmetrical forms.” He graduated from NAU in 1982 with a bachelor of fine arts in metalsmithing.

Duane’s signature style is spare, modern, abstract linear designs reinterpreting traditional Native American motifs. He shows a penchant for unusual and striking color combinations. He emphasizes the design of the setting rather than a particular stone. Yet, he describes stones as gifts from the earth, a part of the Creator’s bounty. “Whatever we use comes as a gift,” he says. “We ask to borrow that beauty, like we say with stones that we are borrowing the rainbow’s colors.” A distinctive characteristic of his jewelry is its sculptural quality; he also combines metals, leaving channels into which stones are inlaid separated by a thin band of gold to enhance color.

Duane’s wife Jan, from San Felipe Pueblo, assists him with jewelry finishing, using a burnishing technique they developed that moves through a series of micro-fine abrasives. The couple has two children, daughter Kari and son Norman. Along with his family and silversmithing, Duane is involved in cultural events at Laguna Pueblo and has served on many boards for the arts, archaeology, and Native American issues. As a way of showing gratitude and to help his people, he has taught innumerable workshops, mentoring and encouraging young Native artists.

As a father, artist, teacher, and community advocate, Duane is always aware that his work is part of a web of creation that connects family and people with nature, the past, and the future, the living and the spiritual worlds. As he says, “Native Americans take a holistic approach.” 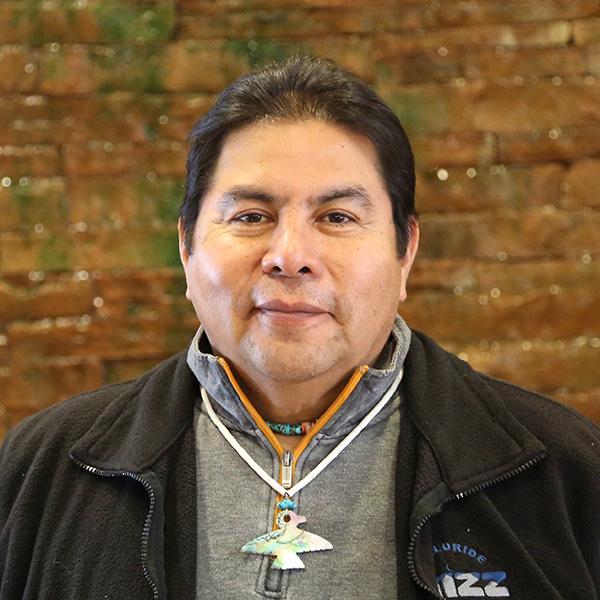