Video games got Eric into jewelry making. As the young son of noted jeweler Jolene Eustace, Eric was told, “If you want to buy video games, you have to make your own money!” So at eight years of age, he began to lean the art.

Although he has employed several techniques, Eric has made the most of his recent pieces using his own distinctive application of the ancient Japanese process of mokume-gane (or game). Mokume-gane (pronounces moe-koo-may-gah-nae) is a technique that originated with the sword smiths who forged the famous samurai swords. Eric first saw the process while attending an information-sharing meeting of national pueblo design artists organized by Hopi jeweler Duane Maktima in the late 1990s. Since he was awaiting the birth of his daughter at that time, Eric was not able to complete the mokume courses offered at the meetings. So he found an instruction book and began teaching himself the difficult technique. It took him three or four experiments with the lengthy process before he was satisfied with the results.

Creating mokume is a long intensive process. Starting with thin sheets of different materials, the basic pattern is formed by the stacking order of the sheets. Eric’s work often alternates 16 layers of silver with another 16 layers of copper. Cleaning the layers is necessary to remove any grease that might cause breakage in the fabrication process. Eric might spend as much as five hours with a toothbrush, pumice, and a cleansing solution to complete this part of the work. Not surprisingly, he says this is his least favorite part of the process. After cleaning, the sheets are clamped together to create pressure, and the piece is put into the kiln at 1,360 degrees for about 10 hours. When the stack reaches the correct temperature, the metal sheets will fuse together, in essence creating a solid block. After the block comes out of the kiln, Eric begins the work of cutting, trimming, soldering, hammering, drilling, and grinding to make the whorling patterns in the finished piece.

Eric’s jewelry displays organic, earthy, textured forms and surfaces and free-form designs, like his mother’s. He works both in gold and silver and cuts his own stones. He uses stamps made from screws provided by his father-in-law, who is a mechanic. Like his mother Jolene, Eric usually adds small gold balls to his pieces, as a signature of his work.

Long drives and hikes in the Jemez and trips to the Santa Fe plaza to “check out what others are doing” provide inspiration to Eric. He also sees patterns to use in his jewelry when he looks at almost anything – pottery, rugs, or even carved wooden surfaces. The petit-point work of his Zuni aunts has inspired some of his pieces. His aunt, Rose Dishta, taught him how to incorporate traditional petit-point work. Eric is also influenced by the work of Zuni potters like Noreen Simplicio.

Eric was born in 1979 into a family of jewelers, including his mother and his grandparents Ben and Felicita Eustace. Family tradition ingrained in Eric a commitment to high quality workmanship and materials. He says, “to me, jewelry takes the best of both painting and sculpture. I want to do work that is different and that makes my family proud.” “I am currently working on incorporating inlay work into my pieces.” 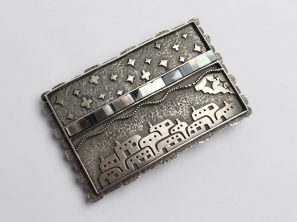