Harold Littlebird is from Laguna and Santo Domingo Pueblos located in New Mexico and now resides in Florida. He was born in 1951 to Andrea Sarracino (Laguna) and Tony L. Bird (Santo Domingo). He is brother to Larry Littlebird, Charlie Bird, and Gail Bird. Harold has two children, Mateo and Maya. Harold began his career in clay under the tutelage of Ralph A. Pardington and graduated from the Institute of American Indian Arts in 1969. Harold has been making award winning pottery for over forty years. Harold’s work is nationally recognized in many private collections and numerous museums, including the Smithsonian Museum in Washington D.C.

His work is entirely hand-built using slab construction with adaptations of traditional coil building. He does not use a potter’s wheel. His work veers from traditional pottery in that it is considered stoneware that is totally usable as tableware. Elaborate designs are meticulously hand drawn with under glaze pencils. Then he kiln fires the stoneware in an oxidation fired process.

Harold has won many awards since 1969, including at the Santa Fe Indian Market, the Eiteljorg, and the Heard Museum show. 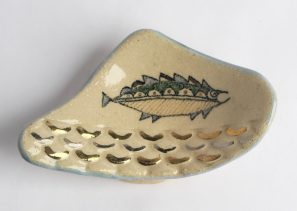