Isaiah Ortiz learned jewelry-making from his father, Raymond Twinhorse and “is still learning from him everyday.” The two work together in the same home studio. Isaiah was born in 1976 and began making jewelry when he was fourteen years old. After graduating from Santa Fe Indian School at age eighteen, he started selling under the portal of Santa Fe’s Palace of the Governors. Since then making jewelry has been his main source of income.

Although inspired and taught by his father, Isaiah has created his own distinctive approach. He says his style “has come a long way” since his first simple pieces. Isaiah’s jewelry is fabricated using carving, saw work and stone-on-stone inlay on some pieces. Geometric images predominate in his designs. He works in silver and occasionally uses exotic inlay materials such as White Angel turquoise, dinosaur bone and black coral. Isaiah’s style is so unique that one buyer remarked he’d “never seen anything like it.”

For Isaiah, the creative process is the most rewarding part of his work. He tried to perfect every aspect of his art and is “never satisfied.”

Isaiah has shown his jewelry at the Heard Museum and the Santa Fe Indian Market. One of his pieces is in the permanent collection of the Autrey National Center Museum in Los Angeles. 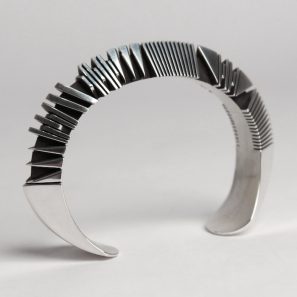