Jacinthe Two Bulls is a Haida weaver who began learning the art of Haida basket weaving at age seven from her mother, Vicki LeCornu. Vicki LeCornu learned to weave from renowned weavers Delores Churchill and Selina Peratrovich. These fine women taught her not only technique, but the demeanor to be a strong weaver. She recalls Churchill telling her class, “If you don’t have the humility to listen, you’ll be a really slow artist.” The humility to listen, and by extension learn, is a quality Vicki exercises as she creates her woven works of art – always aware that there is “a lot to be learned, [weaving] is no simple thing.”

In fact, simply gathering the necessary materials can be an extensive and fairly costly process. Jacinthe learned how to gather bark from her uncle, Douglas Burgess. The process is laborious. Jacinthe hikes through the rainforest and selects a straight tree, free of branches for a length. The chosen tree is prayed to and thanked. Then, Jacinthe cuts into the bark, a width small than half of the tree, so the tree may heal, then she peels the bark from the tree and cleans the outer bark from the inner. This process takes place every spring.

And of course, once the supplies are gathered and prepared, determining and executing the design is an endeavor with its own difficulties and rewards. In twenty years, Jacinthe has learned many styles and techniques of weaving.

Jacinthe continues to practice her weaving, always conscious of the cultural context within which the art form exists. All weaving designs have meaningful names and many, particularly hat designs, have stories. Symbolic meaning exists in the style and method of the weaving, but the particular stories have specific, inherited cultural value.

However, Jacinthe does not view Haida weaving as a closed art form, inaccessible to new life or innovation. On the contrary, she views weaving as a connection – not only to the past, but to the future as well. “Basketry is a graphic language,” she says, and she talks about the mathematical process involved in adding to and maintaining a design. She recalls having to reacquaint herself with the algebra as she becomes a weaver, and ruminates over the possibilities of using technology to enhance, promote and protect the art form of Haida weaving.

Ultimately, Jacinthe’s work is much like the artists herself – rooted in tradition but also adventurous. Specific and conscientious in its form, but inextricably linked to the larger body that is Haida culture. 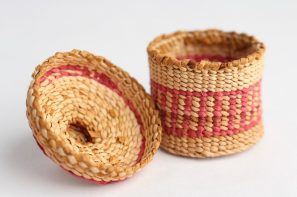