“Art is my form, from which I have been created,
In the depths of fire, I breathe in the light, In the darkness, I await a torch, to be re-created.”

Jonathan Loretto is from Walatowa (Jemez) and Cochiti and has been creating traditional pottery for the last thirty years. A few years ago, he switched from creating vessels to developing figurative forms. Most recently, he has been creating “storytelling bobbleheads.” These figures combine the figurative tradition of Cochiti Pueblo with the contemporary pop phenomenon of the bobblehead. Today, Jonathan is in the third phase of his bobblehead collection, which has become more defined and realistic.

Jonathan was the 2012 recipient of the Rollin and Mary Ella King Fellowship which is awarded by the School of Advanced Research, Santa Fe, New Mexico, and was in residence at SAR from September 1 – December 1, 2012, where he collaborated with other artists and furthered the designs of his bobbleheads.

In 2005 Jonathan was awarded a Goodman Fellowship from the Wheelwright Museum. He used the funds to travel to Mata Ortiz to further his skills and knowledge of pottery making, particularly with regard to slips and firing methods. The month at Mata Ortiz stimulated his creative energies. Because Jonathan is also talented as a jeweler, he began to incorporate his inlay skills with his pottery which resulted in some very imaginative pieces. Work from this period included fruitful collaborations with several of the Mata Ortiz potters. In 2011 Jonathan collaborated with Graciella Gallegos for their annual show in Mata Ortiz.

Jonathan was educated at the Institute of American Indian Arts in Santa Fe, New Mexico, where he studied Photography for two years. He also attended Southwestern Indian Polytechnical Institute in Albuquerque, New Mexico and studied Culinary Arts for two years.

He has worked at Fairchild & Co. and Nancy Brown Jewelers in Santa Fe, New Mexico, as a designer of semi-precious tones. Jonathan worked for Ralph Lauren, designing and making concho belts for the Concho Belt Collection. Oprah Winfrey wore one of the Concho belts on the cover of “O” magazine. 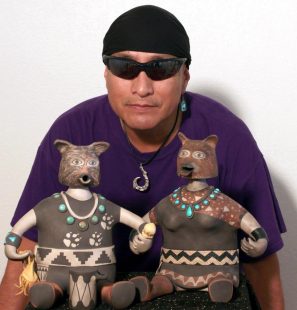