Lorraine was born in 1970 in Monument Valley, Douglas Mesa, Utah. She is one of the daughter of Mary Holiday Black, and sister of Sally Black. Lorraine grew up in the family tradition of basket weaving, and learned to weave ceremonial baskets at age 13. “I made my first basket for a teacher at my school,” she said. She was getting married and needed a wedding basket. “Then I made a big one and sold it to a gallery in Kayenta. I was only fourteen and so I gave the money to my mother. Even though I am now married, I use the name Black because it is so famous — especially since my mother won her big award.”

Lorraine and her family collect sumac in the fall, gathering enough material to last a year. We are always careful to trim only a little from each bush so that it will grow new branches in the spring. She then prepares the sumac for weaving by stripping the bark and splitting the sumac branch into three thin strips, using her teeth.

Some of the strips are then dyed with the colors she plans to use. As the basket is started, three or five un-split sumac or willow rods are held in her hand and then sewn with sumac coils over the foundation.

Today Lorraine is the mother of two young sons — they live in southeastern Utah. Her roots are still in Monument Valley and her beautiful and innovative markets are influenced by her heritage. 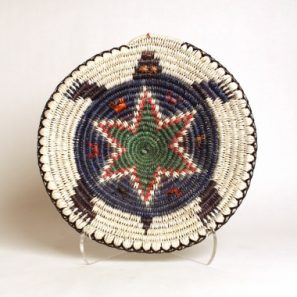