Mark was born in 1958, the great grandson of potter Grace Chapella. He learned much of his skills on his own, with inspiration from his great grandmother who lived to be over 100 years old. Her designs are often evident in Mark’s work.

Before starting his pottery career, Mark worked for a short time as a cook at the Polacca Day School. He gave that up when he discovered his pottery made more money than his salary checks.

Mark typically works in black and red on yellow jars. His styles range from classical to innovative shapes. Designs sometimes include fire clouds or a blush coloring that result from Mark’s own outdoor firing technique. His paints are natural pigments.

Mark has taken pleasure in being a mentor and encouragement to his younger family members. He has been featured in several books, including Talking with the Clay and The Art of Hopi-Tewa Pottery. 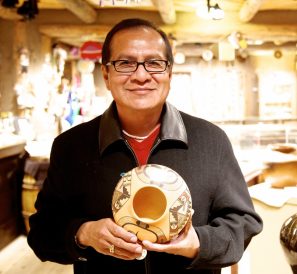