Morris Muskett began his creative career as a weaver. He quit his job as a civil engineer with the Indian Health Services in Gallup, New Mexico to travel and pursue serious study of traditional weaving techniques. Morris’s chosen approach is to use a traditional Navajo vertical loom to make pieces inspired by antique and prehistoric Navajo and Pueblo pieces. He says, “Those who wove with no influence from the Europeans were amazing – very original in designs used and color combinations.” He strives to honor that ancient originality by researching little-known techniques and experimenting with natural dyes. His work usually reflects the muted colors of the old-style weavings, with white-on-white being his signature style. Morris specializes in making traditional sashes and belts, although he has also woven mantas, blankets, and hangings. He was the featured artist in the Wheelwright Museum’s 2004 exhibition, “Warp to Weft.”

Recently, Morris’s creativity has expanded to include jewelry-making. Like his textile work, his jewelry is “innovative and different, yet traditional at the same time.” He uses a variety of techniques, and materials, including stamping, twisted and woven wire, crystal beads, copper, and gold drops to embellish his pieces. Some of his work is clearly inspired by his weaving artistry and the designs he remembers from his great-grandmothers, who were weavers. He incorporates textile designs and has even included a cast silver bobbin complete with red thread as a decorative element on a bracelet.

Morris spent summers with his grandmother, helping herd sheep and make beaded dolls. He recalls, “She was self-motivated to make things the way she wanted them. She instilled in me that aspect of being an artist, and that’s what I do.…” 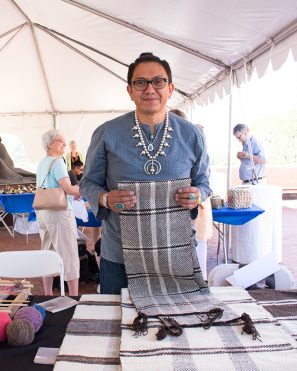