Nick is of Hopi, Navajo, Shawnee, and Choctaw heritage. It was Nick’s grandfather, Guy Maktima, who taught him kachina carving. For most of his professional career, Nick served in the U.S. Army, and so he had a chance to show his kachinas throughout much of the country as he traveled on his tours of duty.

Like the work of his two sons Brent and Randy, Nick’s work is in the traditional style, using natural pigments, subdued colors, and intricate, detailed painting.

His artistic talents are evident not only in his carving but also in his music. Nick has served as manager for the Native Star Dance Team, assembled in 2005 to employ music as a way of instilling pride in Native American heritage and displaying tribal histories while presenting upbeat entertainment. The group has traveled all over the world to numerous events, including a weeklong tour of military bases in Iraq and Kuwait for troops stationed in those distant lands.

After a full career in the military, Nick returned to college. in 2007 he graduated from the University of New Mexico, majoring in education.

Nick and his wife Sharon are the parents of three children, two sons and daughter Audrey. 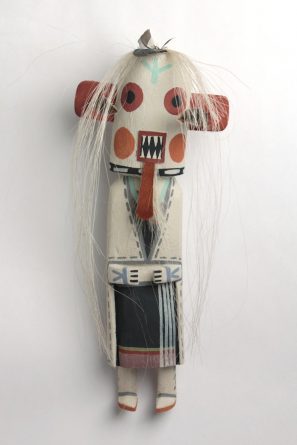