Richard is perhaps best known for his distinctive textured silver designs. His trademark techniqie of granulation was discovered by accident when he noticed silver filings were fusing onto a ring he was soldering. He calls the process which produces this granulated surface texture “reticulation,” and he has been perfecting the technique throughout his career.

Born in 1956, Richard has been a jeweler since the mid 1970s. He learned jewelry making from his brother Boyd and from Kenneth Begay at Navajo Community College in Arizona. He quickly progressed from basic tasks of cutting and polishing stones to the more complex process of inlay.

Richard’s contemporary silver and hold work features the use of fabrication, overlay, and granulation. He is also known for colorful inlay work with a variety of natural stones and for his fine degree of control and attention to detail. His designs are motivated by images of the natural world, particularly the Wide Ruins area of the reservation where he spent a large part of his youth. Richard says of his work, “I am inspired by the colors of the mountains at sunset, the patterns of shadow and light that emerge at dawn, and the pinpoints of starlight against the black night sky.”

His pieces typically contain the symbol for lighting and an arrow pattern. The lightning stands for natural causes, while the arrowhead symbolizes man-made elements. Richard says the design represents the ups and downs of life. “Some things we can’t do anything about and you should try to enjoy life to the fullest.” 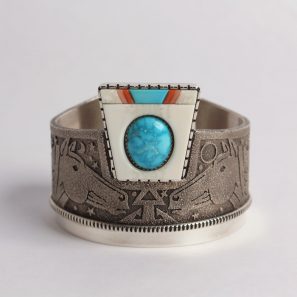