Born on December 29, 1950, the son of Andrew and Juanita Tenorio, on the Santo Domingo Pueblo, Robert remembers watching his paternal grandmother, Andrea Ortiz, make dough bowls, water jars, and other pottery. Though he loved dabbling clay, when he enrolled in the Institute of American Indian Arts in Santa Fe, the ceramics classes were full. At that time, jewelry making was popular, and that is where he would up.

“I wanted to make jewelry to help with the family, but I was always going into the ceramics area, stealing their clay, potting away. One day, a pottery teacher, Ohille Loloma (wife of famous jeweler, Charles Loloma) caught me making a bowl. She helped me change my focus to pottery. I’ve been potting ever since.”

Pottery helped put Robert through school. When he returned to the Pueblo, however, he didn’t have the processed clay and kiln that had been available to him. It was then he “started over,” using native clays and the traditional firing methods of his ancestors, making polychrome jars, pots, and canteens with the geometric designs characteristic of centuries-old Santo Domingo pots. He has been potting full time since 1970.

Robert it proud of his designs and shapes, all of which are traditional, all of which reflect his reverence for his heritage. But it is also his expertise in creating and applying slips that sets his work apart. The application of white slips, for instance, he learned by trial and error. Now he knows to apply 30-40 coats of a certain consistency, which takes a whole day to dry and turn white. Though his designs are traditional, he uses his own interpretations to make his work unmistakably Tenorio. His first award was in 1971 from the Heard Museum in Arizona. He now has ribbons enough, he laughingly noted, to “make two quilts!” One of his pieces entered in Indian Market was so intriguing that a new category was made just for it — Prehistoric Pottery —  for which he also received an award.

“I believe I was put in this world to revive Santo Domingo pottery. Hopefully I’ve done my part to please the public. And when that happens it gives me great satisfaction.” 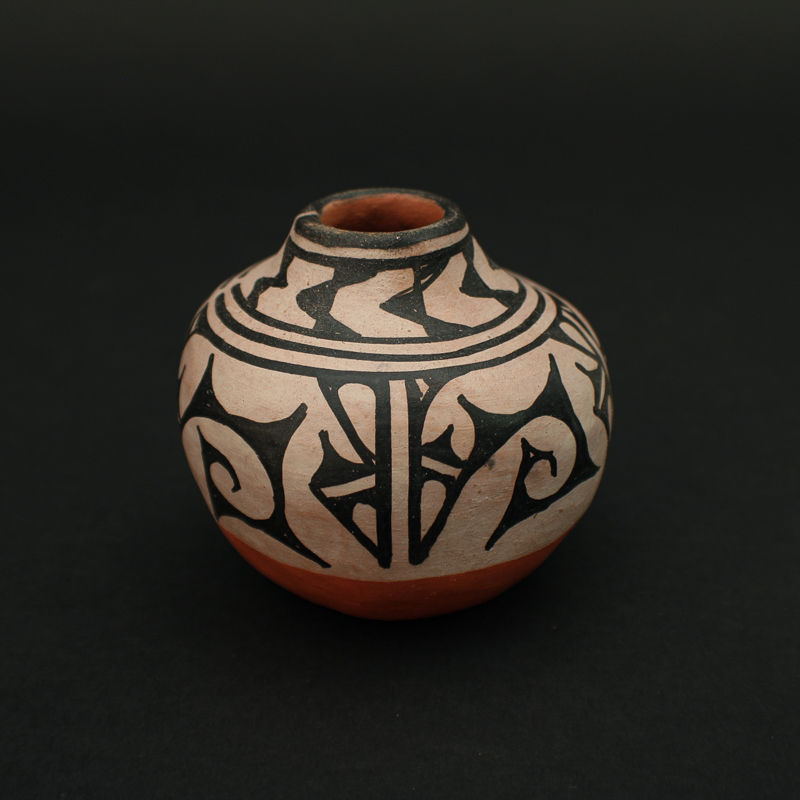