Having grown up the art community of Zuni Pueblo, Silvester has been surrounded by art all his life. He says, “By the age of five or six, you’d find me in a corner painting, drawing, or making sculpture. I dabbled in everything from sculpture to jewelry.” He won a youth division award from the Heard Museum when he was only nine. The Museum then bought the award-winning doll scene Silvester had created.

Helen Hardin’s work was an inspiration to the young Silvester. In his late teens, he saw a show of Hardin’s paintings and was greatly influenced by it, thinking that her work created something like a “meditative space.” Silvester then began using acrylics and “practicing how to do fine lines (like Hardin’s).”

Silvester now concentrates on paintings, murals, and sculpture. His work is done with acrylics on masonite board. The images shimmer with Silvester’s mixture of metallic powder and paint. His painting includes a splatter technique he created, as well as sponging and stenciling, all to create interesting layers and textures. He may apply as many as seven layers of different colored paint in a square inch. A large painting can take him up to three months to make.

His images are contemporary and abstract in nature. But the general subject matter comes from Silvester’s experiences growing up in Zuni. Initiated into a Katsina clan as a youth, he “likes to make work that gives you a feeling of what I experienced, because to me it was and still is a very powerful thing.” His recent “War God” series uses symbols close to the Zuni people. While respecting the privacy of Zuni beliefs, he has tried to show the essence of the meaningful symbolism. He says he has used the War God imagery because “it’s something I admired when growing up.”

Silvester’s favorite part of the creative process is seeing the final product. As a self-taught painter, he says he was sometimes “full of doubt the whole time I was painting and wondering if it would come out right.” With so much time invested in the work, Silvester is now careful to plan his pieces to make sure they match his creative intent. He believes his best work is yet to come, and says, “I want to do intricate, refined paintings with an element that lasts over time.” 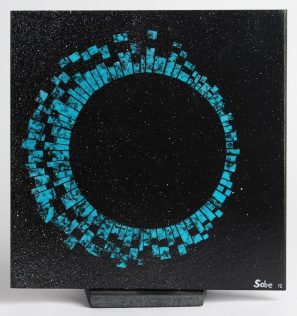