Essay by Danielle Hena (Tesuque, Acoma, Navajo), curatorial intern (Fort Lewis College, Durango, CO) Through art we can feel, see, and smell the history within a creation. Walking into the collections vault I have to stop and take everything in, reminding myself of all the history that is in the room. I walk through ... Read More 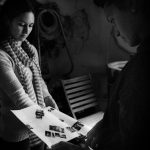 Yve Chavez (Tongva; PhD UCLA, 2017), is the Wheelwright Museum’s first Andrew W. Mellon Fellow. She started working at the museum in June 2017 and is curator of the exhibition LIT: The Work of Rose B. Simpson, which will open this coming November—the first major show highlighting Simpson’s career. Simpson is making several new life-size ... Read More

Thank you to the Albuquerque Journal for the write-up on our upcoming event with Benjamin Harjo, Jr.! Read the article.   ... Read More 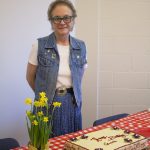 Happy first day of Spring! Today we celebrated Connie Campbell's birthday, which was on Saturday, with a special lunch. Connie, who is a long-time sales associate in the Case Trading Post, has always been so considerate of other staff members in celebrating their birthdays, whether baking cakes herself or finding the prettiest birthday cards. Thank ... Read More

Many thanks to the Albuquerque Journal for the great coverage of our new publication, Mary Wheelwright: Her Book! Fascination with Navajo religion fuels biography ... Read More 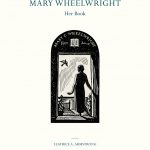 GREAT NEWS as the Wheelwright Museum Enters Its 80th Year

The Wheelwright Museum, New Mexico's oldest independent, nonprofit museum, is proud to announce several important new initiatives as it begins to celebrate its 80th anniversary. Fellowships The Andrew W. Mellon Foundation has awarded the museum a grant of $300,000 to launch a fellowship program. Fellows will work closely with the museum's exhibition team in ... Read More

The Wheelwright Museum of the American Indian is proud to announce the release of a new publication, Mary Wheelwright: Her Book, the first comprehensive biography of Mary Cabot Wheelwright, an important figure in the history of New Mexico and the greater Southwest. The book is based on more than fifteen years of oral history and ... Read More 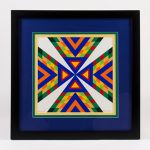 Greetings folks! After a busy and hectic summer, I’m happy to get the chance to bring you some new featured works by Benjamin Harjo, Jr. Knowing Ben for many, many years, I always love to see what he comes up with from one painting to the next. His use of themes, colors, and whimsical ... Read More 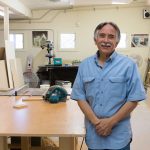 We here at the Wheelwright Museum wanted to take a moment to recognize former museum preparator Arthur Esquibel. After an impressive grand total of 40 years of working at the museum, longer than anyone else ever on staff, he recently retired at the end of May this year. Arthur could tell a lot of stories ... Read More

15 new things to do, see and eat in Santa Fe

Thank you to The Denver Post and writer Ray Mark Rinaldi for the mention! http://www.denverpost.com/travel/ci_29732864/15-new-things-do-see-and-eat-santa ... Read More

Article on the Coe show in the Pasatiempo

Thank you to the Santa Fe New Mexican's Pasatiempo and writer Michael Abatemarco for the beautiful article on Ralph T. Coe and our exhibition with the Ralph T. Coe Foundation, Connoisseurship and Good Pie: Ted Coe and Collecting Native Art! http://www.santafenewmexican.com/pasatiempo/art/pie-in-the-sky-the-ralph-t-coe-foundation/article_a2bdf51c-f795-11e5-8943-574ae5b9201e.html   ... Read More 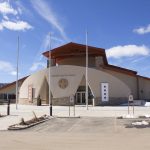 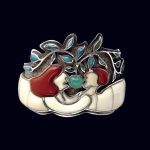 Curator Cheri Falkenstien-Doyle's article, "Eveli Sabatie: Between Worlds and Time," just came out for Ornament Magazine! This coming June, the Wheelwright Museum will present a show in the Schultz gallery of the Center of the Study of Southwestern jewelry on the work of Eveli Sabatie, protégé and collaborator of the great Hopi jeweler Charles ... Read More 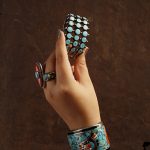 The opening of our new Jim and Lauris Phillips Center for the Study of Southwestern Jewelry made First American Art Magazine‘s Top 10 Native Art Events of 2015! Check out the link to see who else made the list! http://firstamericanartmagazine.com/2015-top-ten/ ... Read More 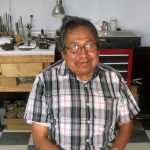 After the busy months of activity here at Wheelwright, I am pleased to resume the Case Trading Post's "Manager's Selections" by showcasing a small variety of work by the great Navajo stamp work and jewelry master Norbert Peshlakai. I have known Norbert for over 10 years, and I am honored and thrilled to have had ... Read More

An Illuminating Visit by a Maine Basketmaker 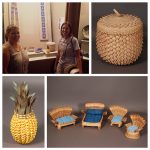 In August, we were pleased to have a visit from renowned Penobscot basketmaker Theresa Secord and her cousin Jill Tompkins, both of whom connected with several pieces in our current exhibition Connoisseurship and Good Pie: Ted Coe and Collecting Native Art, presented in collaboration with the Ralph T. Coe Foundations for ... Read More

In this video from the Ralph T. Coe Foundation's Curatorial Conversation from September 2015, Teri Greeves (Kiowa) shares why the efforts of Ted Coe have been so important in raising the awareness and appreciation of Native art as art, and how these efforts have affected her in a personal way.    ... Read More