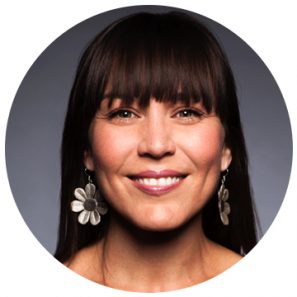 Cara Romero (Chemehuevi Indian Tribe) is a contemporary fine art photographer raised between contrasting settings: the rural Chemehuevi reservation in Mojave Desert, CA and the urban sprawl of Houston, TX. Romero’s identity informs her photography, a blend of fine art and editorial photography, shaped by years of study and a visceral approach to representing Indigenous and non-Indigenous cultural memory, collective history, and experiences from a Native American female perspective. As an undergraduate at the University of Houston, Romero pursued a degree in cultural anthropology. Disillusioned, however, by academic and media portrayals of Native Americans as bygone, Romero realized that making photographs could do more than anthropology did in words, a realization that led to a shift in medium.

Since 1998, Romero’s expansive oeuvre has been informed by formal training in film, digital, fine art and commercial photography. By staging theatrical compositions infused with dramatic color, Romero takes on the role of storyteller, using contemporary photography techniques to depict the modernity of Native peoples, illuminating Indigenous worldviews and aspects of supernaturalism in everyday life.  Maintaining a studio in Santa Fe, NM, Romero regularly participates in Native American art fairs and panel discussions and was featured in PBS’s Craft in America (2019). Her award-winning work is included in many public and private collections internationally. 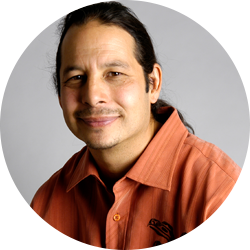 Diego Romero (Cochiti Pueblo) has firmly positioned his work within an Indigenous visuality and has built a career constructing ceramic vessels that elevate Pueblo life to Olympian stature.  A third-generation artist, born and raised in Berkeley, CA to a Cochiti father and a non-Native mother.  After high school, he returned to Pueblo lands and attended the Institute of American Indian Arts, attained degrees from Otis College of Art and Design (BFA) and University of California, Los Angeles (MFA). Romero has an extensive exhibition record with works in significant public collections like the Metropolitan Museum of Art, NY, the Cartier Foundation, France, the Peabody Essex Museum, MA, the Denver Art Museum, CO, the Heard Museum, AZ, the British Museum, UK, and the Scottish National Museum. His narrative style evokes pre-contact Mimbres pottery, Greek amphorae (two-handled vases) and Anasazi ceramics, Romero’s practice investigates the marginalized status of Indigenous history and society.

Using historically situated oral traditions as source material, Romero departs visually from the canonical work of Pueblo pottery and relies on a narrative style of comic books and popular culture. Works transcend the materiality of the object and engage viewers in humorous interplay in which Romero’s overt anti-colonial content is seen as non-threatening. The confrontational and subversive nature of the work is commonly overlooked in lieu of Romero’s excellent craftsmanship and artistry.  Merging autobiography with contemporary Indian life and stories of Pueblo resistance to colonial violence, he elevates Pueblo and contemporary Indian narratives to the level of the superhero, devices he draws from both Greek pottery and comics.  When placed into an autobiographical context, his works develop further layers of nuance and complexity.  This investigatory nature of inserting biographical material while interrogating the cross-sections of Indian life enable Romero to transcend the commonly provincial status of contemporary Indian art.