Join the Friends of the Wheelwright for studio tours in Santo Domingo Pueblo! 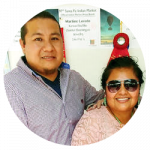 My name is Farrell Pacheco and I am from the Pueblo of Santo Domingo. Born and raised through the strength of the women, the knowledge of the elders, and the courage of the men of my village. With their hands I was molded to be a productive member by attending class during the school year, summers in the corn field, and winters praying through dance for the strength of my people. Year after year my childhood was a revolting cycle of school, farm and dance. I entered into the 5th grade seeking more of my hands and began to cut and drill heshi olive shells. Then mosaic inlay onto shells and bones. I did this process to help my grandfather prepare for his selling trips, but it was the trill of heavy machinery that kept me going. The slicer, stone grinder, and high speed polisher. As I transitioned into high school, I took a silversmith class with Ms. Stubbs. She saw something in me that I did not. Ms. Stubbs knew I could go far with my jewelry.  As a kid in high school I envisioned getting a good paying job and a sports car. After graduation, I took a career in forest fire fighter then onto construction remodeling and landscaping.

In 2008, I was reunited with my high school prom date, Rey, who later became my wife. She, along with her uncle, Martine Lovato, were creating and selling jewelry. I was surprised because she was not the same person I knew back then. Together, they inspired me and I knew my hands demanded more. I could not sleep for my mind was always envisioning all I could create.

January 2018, SWAIA members were in Santo Domingo retrieving application for the summer Indian Market. My wife and her uncle reapplied and I was a first time applicant. I applied praying my work would be considered. Shortly after, I began to work day and night in our workshop, creating a piece worthy to be judged. In March the acceptance letter came, the stress of proving my worth as an artist set in. In July I finished what my heart and breath went into. In great disbelief along with amazement I stared at my piece and thought of all my years of praying. I entered my traditional Fan Tail necklace into judging with high hopes, because it took me six months to perfect my piece.

The Thursday before Indian Market, my wife and I took a break from our work and drove into Santa Fe for dinner. On the way home I received a call from an unknown number, I handed the phone to her and she answered. “What? What? Oh my god!,” is all I heard. She turned to me and said, “You’re invited to the Best of Show luncheon tomorrow!” The following day I learned that Fan Tail took Best of Division, Best of Class: Jewelry, and a First Place Blue Ribbon. My necklace and I are the first from Santo Domingo to receive this recognition at the SWAIA Indian Market. My prized piece is dedicated to the strength of the women, the wise of the elders and the courage of the men of my village. For I was born and raised through them. 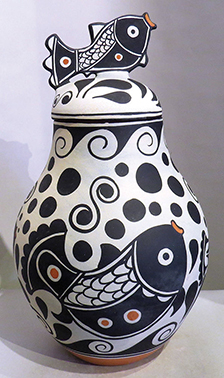 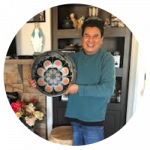 Born 1963 in Santo Domingo Pueblo, Thomas Tenorio started making pots in the early 1990’s. He grew up thinking he came from a family of heshi makers, but later found that his maternal great-grandmother made traditional pots and sold them road side in the 1940’s. Realizing that only a few families continue to make Santo Domingo-style pottery, he was inspired to learn and keep the tradition alive.

Thomas is a self-taught potter: “Nobody showed me how. I learned on my own through a lot of trial and error.” He does credit Kenneth Chapman’s book The Pottery of Santo Domingo Pueblo for providing him with examples of older Santo Domingo designs.

He uses Santo Domingo clay which he cleans, mixes, hand-coils, shapes, decorates and then fires outdoors in an open pit…just as his ancestors did for hundreds of years before him. He learned to protect his pots during firing by surrounding them with a metal cage so no fuel touches and burns the pots. It took him years to figure out the complicated chemistries of the buff slip and spinach paint (made from bee weed).

Thomas’ greatest pleasure comes through recognition of his current work. While he enjoys the process, he “gets lost in the painting and could sit for hours and hours and paint.” He especially loves painting the swirls of the water, the wind and the corn. He also loves painting his bowls, especially if they contain fish or traditional birds. He is exploring new shapes and designs on his more recent work but he isn’t forgetting the traditional shapes and designs of Kewa on his huge pots.

Thomas often participates in the Heard Museum Indian Art Fair (where he earned the 2012 1st Place ribbon for Traditional Painted Pottery). He earned the same 1st Place award at the Heard in 2007 and has earned 1st and 2nd Place ribbons at the SWAIA Santa Fe Indian Market in 2015, 2014, 2011 and 2010.

His pottery can be found in the collections of: 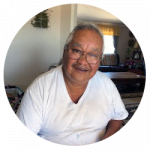