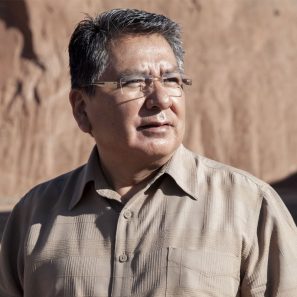 We are pleased to highlight Raymond Yazzie (Diné) and his son Christopher Yazzie (Diné) for the first conversation. The Wheelwright Museum has pieces of Raymond’s work in its permanent collection and on display in the Jim and Lauris Phillips Center for the Study of Southwestern Jewelry.

Christopher’s work is available in the Case Trading Post. 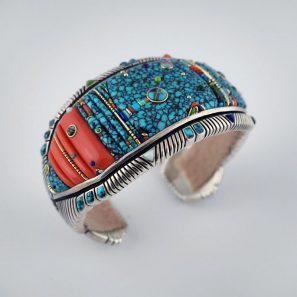 Raymond Yazzie was born in Vanderwagen, New Mexico in 1959, to Navajo parents who were both silversmiths. The family of twelve children lived in a traditional hogan until the parents divorced and Raymond went to live and work with an older brother, also a silversmith. At about age ten he was sent to work at Joe Tanner’s trading post in Gallup, cleaning the workspace of his brother Lee who was cutting stones for Tanner’s jewelry.

Eventually, Raymond apprenticed with Lee and learned the art of precision stonework for which he is now famous. Raymond has won many awards for jewelry and has exhibited his work at the Museum of Northern Arizona in Flagstaff, Heard Museum in Phoenix, and the American Craft Museum in New York. His most recent exhibition, Glittering World: Navajo Jewelry of the Yazzie Family, was shown at the Smithsonian’s National Museum of the American Indian George Heye Center in New York City in 2015-2016, and included 330 pieces of the family’s work, focusing on Lee and Raymond. 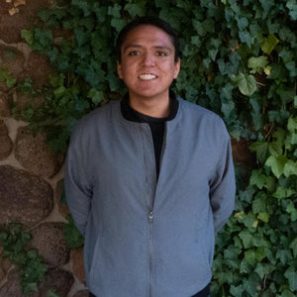 Christopher Ray Yazzie was born on January 15, 1995. Christopher comes from a long lineage of talented Navajo jewelry artists, including his accomplished parents, Raymond Yazzie and Colina Yazzie. Christopher attended the University of New Mexico and majored in business. He came back home to Gallup to help his parents with their store and continue to advance his jewelry-making skills. His parents, aunts, and uncles (particularly Lee Yazzie) are his biggest influences. Christopher is quickly following in their footsteps and making beautiful jewelry.

In his spare time, Christopher likes to play tennis, basketball, and paint. His creative process is also inspired by music. He plays guitar, bass, and keyboard, and he loves classical rock.

Christopher is a kind-hearted young man dedicated to his family and their traditions. We’re excited to see how Christopher continues his family’s artistic lineage; we’re certain he has a bright future ahead!