I think that any fundamental success in creating something has to come from a certain fire, from an intense desire to help and from love of the activity.

Born in Boston in 1878, Mary Cabot Wheelwright traced her ancestry to eighteenth-century Yankee merchants who made the city a major economic center. Her family built its fortune on shipping, including the transport of furs, opium, and slaves. Adventurous men on the Cabot side explored China, the Yucatan, and the “untamed west” of Illinois; men and women alike pursued natural history, art, and philanthropy. Mary’s mother Sarah was a close friend of Ralph Waldo Emerson and raised Mary in the religious liberalism of the Transcendentalists and the Unitarian Church. Mary Wheelwright was her parents’ only child, born when her father Andrew was 51 and her mother Sarah (called Sadie) was 42. Although Andrew and Sadie took her traveling through Europe, Egypt, and California, they were protective; a friend commented that Mary had trouble “growing up in cotton wool.” Obliged to “knuckle under and do just what she was told,” it was not until 1918, after both parents had passed away, that Mary was free to live the life she chose. In 1918, shortly before her 40th birthday, Mary Wheelwright arrived in the town of Alcalde, New Mexico. In no time she was an enthusiastic Westerner—devoted to trail riding, camping, and convincing cowboys “that it was possible to be a good sport and also drink tea”—but also committed to the preservation of New Mexico’s historic and cultural legacies. In addition to founding the Museum of Navajo Ceremonial Art (now the Wheelwright Museum), Mary Wheelwright made significant contributions to the Indian Arts Fund, the New Mexico Historical Society, and the Spanish Colonial Arts Society. This exhibition examines her role in building and preserving New Mexico’s unique cultural identity. 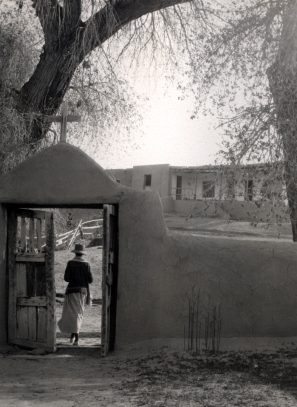