Exhibitions › A Quiet Pride: The Art of Clifford Beck

Condensed and adapted for the Winter 1995-96 issue of Wheelwright Museum’s former tri-annual newsletter, The Messenger, from the catalog for the exhibition A QUIET PRIDE: The Art of Clifford Beck.

CLIFFORD BECK: PORTRAITS OF THE PEOPLE
By Sally Hyer

Clifford Beck, Jr., is an artist whose portraits of The People are the image of a worldview and are rooted in cultural values, memory, and oral tradition. Of them he has said, “Each face reveals a story. I analyze faces like a historian analyses the details of mankind’s written history.” Over a thirty-year career, Beck has singlemindedly pursued his creative vision. He is a generous person committed to sharing with others. Today he is passionately invovled in painting, exploring the aesthetic and moral issues that surround art that derives its inspiration from traditional culture, and helping a new generation of talented young Navajo artists.

Born to a prominent Piñon, Arizona, family in 1946, Beck was the second of nine children. His grandfather was a silversmith and his mother, Esther Yellowhair, a weaver.

The power of Navajo language and oral tradition shaped Clifford Beck as a child in the late 1940s. He was surrounded by a web of family relationships woven together by language, ceremonies, and art. He recognizes today that artistic expression is embedded in language. As a little boy at his father’s Round Valley store in Piñon, “I was forever awoken to the beauty of Navajo arts and crafts, our Navajo artistry.” He also observed his father’s discerning eye for quality turquoise stones and talent for business transactions. At home, he was surrounded by his parents’ beautiful collection of pawn jewelry and his mother’s weavings.

Beck lived at home until the third grade, then attended boarding schools in Holbrook and stayed for a while with the family of a college music instructor so he could attend high school in Phoenix. He graduated from high school in Flagstaff in 1964. A methodical search for the right college led him to the California College of Arts and Crafts in Oakland. He was among the first generation of Navajos to benefit from tribal scholarship funds.

The CCAC faculty included practicing San Francisco artist and former instructors from the celebrated Bauhaus school of design, closed by the German government in 1933. There was also informal training from native artists working in the Bay Area such as painter R. C. Gorman, who consistently encouraged Beck ans is still a family friend. Tesuque painter and printmaker Patrick Swazo Hinds was a mentor, and in Beck’s sophomore year they had a two-man show in Berkeley.

The young artist was intensely interested in anatomy and figure drawing. He was thrilled by art history lectures on ninteenth-century French painters. He admired Cezanne, Manet, and Toulous-Lautrec. Above all he was inspired by Edgar Degas, the brilliant draftsman who worked in pastels.

At the same time Beck was expanding his knowledge of world culture and searching for individual self-expression, he maintained his cultural and emotional ties to the reservation. Job opportunities were rare, but Beck was hired as art instructor at the newly-formed Navajo Community College in Tsaile, Arizona. He is also an illustrator, and when the tribe created the Navajo Curriculum Center in 1967, he played an important part in illustrated many of their publications. Commercial interest in Beck’s work began to grow. During his three years at NSS and his next job as director of cultural arts at Many Farms High School from 1975-78, he exhibited at the Annual Scottsdale National Indian Arts Exhibition, The Heard Museum, and the Taylor Museum of the Colorado Springs Fine Arts Center. In 1978 he resigned from his position at Many Farms to devote himself to art; he and his wife Roselyn, a school counselor, moved to Tuba City. Their beloved daughter Tazbah was born in 1980. The family lives at the foot of the San Francisco Peaks, the sacred west mountain of the Navajos.

Beck’s work ranges from small, impressionistic pastel sketches to monumental oils. He enjoys using the pastel medium to produces effects of line, tone, and color simultaneously. With it he can draw and also make thick, painterly strokes. Pastel–pure pigment in stick form — creates rich, luminous colors. He favors earth tones touched with blazes of turquoise, scarlet, and fuchsia. Like Degas, Beck is challenged to use the medium in diverse ways, directly or mixed with water, turpentine, oil, or acrylics.

Over the past fifteen years Beck has exhibited at Santa Fe Indian Market, Southwest Museum, San Diego Museum of Man, Mongerson Gallery, the National Museum of Natural History of the Smithsonian Institution, and Kimball Art Center, among others. He joined the Suzanne Brown Gallery in Scottsdale in 1982. His numerous awards include first prizes Indian Market Santa Fe (1992 and 1994), Museum of Northern Arizona (1990), and the Annual Scottsdale National Indian Arts Exhibition (1975), and first place for drawing at Gallup Inter-Tribal Ceremonial and at Red Cloud Indian Art Show (1979)

Beck’s inspiration is unchanging — his desire to pay homage to traditional people who he sees as the foundation of native culture. Their faces, rendered in pastel and oil, are the documents of a life rooted in oral tradition and memory. 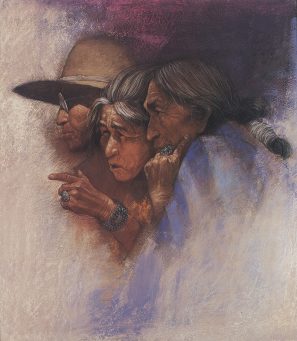