Bob Haozous (Warm Springs Chiricahua Apache) is best known for monumental sculpture, but he works in other media as well. A group of monoprints, illustrations, and human-sized steel cutouts represent his private collection—pieces that have not been for sale—through which he tackles ideas about Native identity, cultural appropriation, and the responsibility of artists to address uncomfortable truths about contemporary life. Most of the works displayed are monoprints—a medium in which the artist manipulates the printing plate as well as the resulting image to create a unique work of art. Haozous has reworked many of the pieces repeatedly as new ideas presented themselves. With the addition of meticulously hand-lettered text, Haozous critiques contemporary American values, advocates for a nature-oriented definition of indigenous identity, and expresses concerns about Native American art in a marketplace that he believes focuses too much on romanticism and decorative value, and too little on critical issues such as environmental degradation and cultural survival. In a group of elegant drawings created for an autobiography by his mother, Anna Marie Houser, Haozous demonstrates his abilities as an illustrator.

Displaying humor and irony that one scholar describes as the tools of a contemporary trickster, Haozous offers Euro-American Culture Zombies, a series skewering non-Native celebrities who appropriate Indian identity to enhance their careers; and Deviants, a group of sixteen caricatures inspired by mug shots published in local newspapers. Bob Haozous creates art to encourage dialogue that addresses “the profound problems [and] the complex people we are today. Why shouldn’t an honest self-portrait be the foundation of contemporary Indian art?” 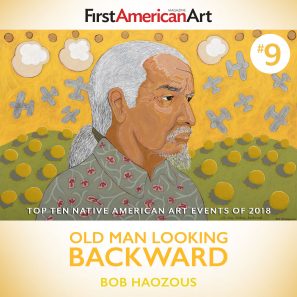 The exhibit is on display until October 2019. 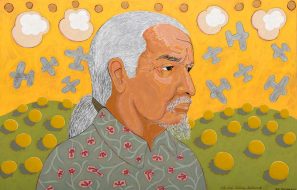