Exhibitions › Born of Fire: Works in Glass by Tony Jojola

in the Klah Gallery
November 12 – April 22, 2000
Tony Jojola, recognized as a master of blown and sculpted glass, is a native of Isleta Pueblo and a graduate of Institute of American Indian Arts. The grandson of a potter, Jojola finds inspiration for his glass vessels in the traditional bowl and jar shapes of Pueblo pottery, and enjoys infusing ancient forms with brilliant translucent color. He finds the Pueblos’ traditional reliance on community cooperation mirrored in the team work required to produce works in glass; and sees a natural connection between glass and pottery in that both have fire as an essential element.

One of a handful of Native American artists who work in glass, Jojola is a founder of Taos Glass Arts & Education, through which members of Taos Pueblo are learning to produce art glass in an effort to stimulate economic, creative and cultural benefits for their community. He believes in the potential of glass as a powerful and expressive new medium for native artists: “I can see an enormous market potential out in the country for glass artwork by Native Americans. The need is there, believe me. If only more young artists would get interested in glass, there would suddenly be a new way for people to support themselves.”

Although his work has been exhibited in New Mexico and elsewhere since 1979, Born of Fire will be Tony Jojola’s first major retrospective. It will feature approximately 60 pieces, many of which are being produced especially for the exhibition, and will include examples of Jojola’s early works. He studied with glass artist Dale Chihuly, with whom he continues to collaborate on major projects, and in 1990-91 he formed part of Chihuly’s team executing the Venetians. 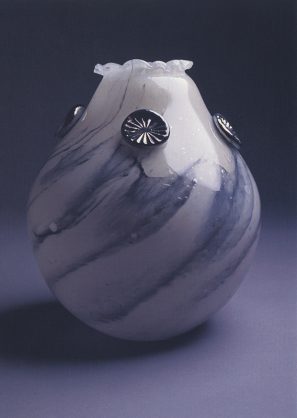