Exhibitions › Bridles and Bits: Treasures from the Southwest

This exhibition celebrates the Wheelwright Museum’s purchase of two rare, early Navajo bridles, made possible with funds donated by the museum’s support group, the Collectors’ Circle.  These simple harness-leather bridles with Navajo-made bits may date as early as 1860 and are among only a handful of their type known to survive.  We show them with objects that illustrate cultural interaction across continents and over several centuries, which resulted in the pinnacle of this art form in the Southwest, expressed by the Navajo in silver, iron, and copper.

Horses were first domesticated in Kazakhstan about 5,500 years ago and were ridden and probably controlled with bridles at that time.  Metal bits, designed to induce greater control, were also used around that time, as suggested by wear on the teeth of a horse found in an ancient burial near the Black Sea.  Horses brought to the New World by the Spanish in the sixteenth century were equipped with cloth or leather bridles and iron bits—commonly the “ring bit,” a severe style of bit that was probably introduced to the Iberian Peninsula by the Moors.

The Spanish apparently prohibited the Native peoples of the Southwest from owning horses.  However following the Pueblo Revolt in 1680, the Navajo, Apaches, and Pueblos acquired horses and began trading them to Native peoples of the Plains.  Archaeological evidence shows that horsemanship, known to all of these people through observation of the Spanish, was adopted immediately:  A Spanish/Mexican iron snaffle bit (a simple style of bit still widely used today) was recovered from the ruins of Cuyamungue, a Tewa Pueblo village north of Santa Fe abandoned in 1696; and a Spanish/Mexican iron ring bit was found in the ruins of a Navajo house in Gobernador Canyon that was abandoned around 1745.

By 1850 the Navajo and some Pueblo Indians—most notably at Zuni—had learned blacksmithing from Spanish New Mexican and possibly Anglo American smiths.  The Navajo are said to be the only Native American tribe to have made their own bits, and most of these are beautifully worked ring bits.  However it is difficult to imagine that the Zuni, masters of many art forms and entrepreneurs for centuries, did not make bits for themselves and for their trading partners throughout the Southwest.

The bridles and bits exhibited here (and in the adjoining gallery) tell many stories about smithing in Mexico, New Mexico, and the southern Plains; they also hint at pieces of history about which we still know very little, for example the sources and styles of harness leather that dictated the dimensions of bridles.

We are grateful to Ned and Jody Martin for lending several pieces exhibited here and for their own research on bridles and bits, published as Bridles of the Americas.  Volume 1:  Indian Silver.  We also thank the School for Advanced Research for lending three important Mexican and Navajo bridles that have never been seen by the public. 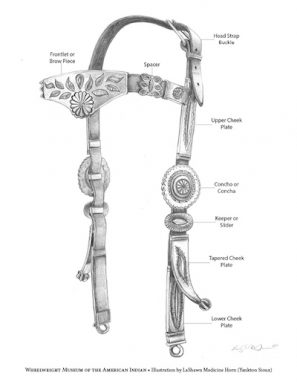