Darren Vigil Gray (Jicarilla Apache/Kiowa Apache) has been called the “Golden Boy of the third generation” of Native American painters. He began studying art in 1975 while enrolled in the high school program at Santa Fe’s Institute of American Indian Arts. This was followed by study at the College of Santa Fe and the University of New Mexico, but by 1986 Gray had given up academics and was painting full-time.

Gray has been inspired by several artists over the years. The great Kiowa/Caddo painter, T. C. Cannon, was his first mentor, and Cannon’s influence is obvious in Gray’s early work. Since 1990 his work has reflected his admiration for Abstract Expressionists such as Willem de Kooning and Jackson Pollock, as well as members of the Bay Area Figurative movement – Elmer Bischoff, David Park, and Richard Diebenkorn.

Gray does not consider himself a draftsman. He draws with paint after the fashion of the Abstract Expressionists, who believed that a painting was never truly finished. He paints and repaints, “making a mess, turning it sideways and making some more mess, mark-making. I have to make a lot of chaos, and out of the chaos I start massaging the forms into play. It’s almost predestined, but I have to go through this process of chaos and find resolution to it.”

T. C. Cannon still influences Gray, who often refers to Cannon’s suggestion that his students “create their own mythology.” The canvases for which Gray is best known today are his “mythological” paintings, or “dreamscapes.” They are grand compositions of haunting characters, created entirely out of his vivid imagination. As Gray has said, “These are symbols, but what do they mean? It is my own mythology. After I’m done with one of [these paintings] I feel as if I’ve been drained of everything – all my psychic, psychological, and spiritual energy.”

Gray restores harmony by painting landscapes of the Jicarilla Apache’s traditional homeland near Abiquiu, New Mexico. “It satisfies a part of the brain where I don’t have to be chained into the narrative of the dreamscapes.”

The exhibition included 50 paintings and prints from more than 30 private collections. It was accompanied by a 52-page full-color catalog with text by Lucy R. Lippard and narrative by Gray; and by a 30-minute video produced by Plaza Productions. 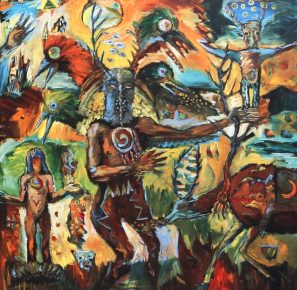