Judith Lowry considers her work to be a modern extension of the storytelling tradition that runs in her family. In her paintings, done in acrylic on large canvases, life-sized figures glow in deep, rich colors. Through the use of symbolism and allegory, she addresses issues such as cross-cultural exchange, stereotypes of all kinds, women’s role in history, and the politics of religion.

“As my father was a career officer [in the U. S. Army], much of my life was spent traveling and living around the world,” Lowry says. “I attended grade school in Germany, Australia, and many states in the U.S. I went to high school in California, Maryland, and Japan. The experience of growing up in a mixed-race family against the backdrop of many different cultural settings provided me with an interesting world-view from which I draw most of my artistic inspiration.” With her family, Judith visited museums and castles in Europe and Japan. Her parents took the time to tell her the stories behind the images she saw.

Her father, Leonard Lowry, was from Susanville, California, the home country of the Hammawi Band Pit River, Mountain Maidu, and Washo tribes of his heritage (he was part Scottish Irish as well; Lowry explores this aspect of the family history in her work). Judith got to know her father’s family better when moved to Susanville in the 1970s. divorced, she raised three children while working as a hairdresser and studying first photography and then painting. She received an M. F. A. from California State University at Chico.

The influences of children’s storybook illustrations, large-scale heroic mythological paintings, and painters like Blake, Breughel, and Bosch can all be found in her paintings. The allegorical way she uses these styles, however, is all her own, and is expressed from a woman’s point of view. Standing in front of one of her paintings, the more you look, the more you see. Entering the work through its rich, stained-glass colors, you may find yourself in a shopping mall for goddesses or watching a conversation between Madonna (the singer), the Easter Rabbit, and Uncle Sam.

“My subject matter is drawn from family stories, myths, cultural observations, and philosophical contemplation,” Lowry says. “I feel a special responsibility to reflect my culture’s and my family’s history with honesty and compassion. People think of Native Americans as dying or dead. Memories are something that survives. . . . All these works indicate some level of survival.” 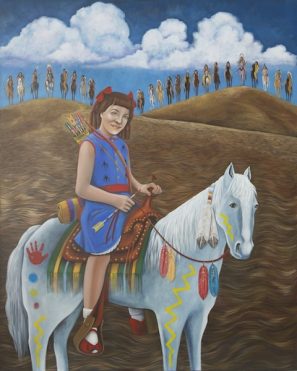