Exhibitions › Center for the Study of Southwestern Jewelry

The Wheelwright Museum’s Jim and Lauris Phillips Center for the Study of Southwestern Jewelry is the result of more than 20 years of collecting and research focused on Navajo and Pueblo jewelry and related traditions. The Center for the Study of Southwestern Jewelry comprises two exhibit galleries totaling 2,000 square feet. A place of learning, teaching, and the development of exhibitions and publications, the Center’s galleries include the Wheelwright’s first permanent exhibition space, the Martha Hopkins Struever Gallery, 1,600 square feet devoted permanently to silversmithing and other forms of metalwork, lapidary, and historic and contemporary jewelry. This gallery will provide visitors a valuable experience year-round, unaffected by the changing of exhibitions and other disruptions. The Schultz Gallery, named in honor of Sid and Ruth Schultz, is 400 square feet and is devoted to changing exhibitions on the same and other subjects.

In keeping with its tradition of excellence in research and interpretation, the Wheelwright has built an important representative collection, which enables the museum to tell the rich, multicultural story of jewelry through examples of innumerable styles and media. One of the strengths of its collection is that many of the earliest objects are documented or attributed to known makers. This enables the museum to present the story of jewelry in the Southwest as a human endeavor rather than just an anonymous sequence of styles.

Jewelry has universal appeal; personal adornment is inextricably linked to concepts of identity and status within and across all cultures. But though jewelry has been a major Native art form in the Southwest for centuries, almost all major exhibiting institutions have treated it as subordinate to the arts of basketry, pottery, and textiles. The Wheelwright Museum owns the country’s most important collection of Zuni fetish carving from the early twentieth century, including numerous examples by Leekya Deyuse, Teddy Weahkee, David Tsikewa, and other pioneers of the craft. In 1995 the Wheelwright acquired the papers of John Adair, the twentieth century’s most noted scholar of Navajo and Pueblo silversmithing. Recently it acquired the papers of David L. Neumann, who published on the technology, trade, and marketing of Navajo and Zuni jewelry during the mid-twentieth century.

During the past decade the Wheelwright has acquired the Carl Lewis Druckman collection of Navajo and Pueblo Spoons (hailed as important and innovative even by trustees and curators at other institutions); the Anderman/Gallegos collection of New Mexican filigree; a major collection of early southwestern earrings; “thunderbird” jewelry from Santo Domingo Pueblo; jewelry and hollowware by masters including Kenneth Begay, Morris Robinson, Lewis Lomay, and Charles Loloma; and contemporary work by Yazzie Johnson and Gail Bird, Norbert Peshlakai, McKee Platero, Perry Shorty, and others. Today the Wheelwright’s holdings exemplify artists and traditions dating from the 1870s to the present, many of which are not represented in any other museum. 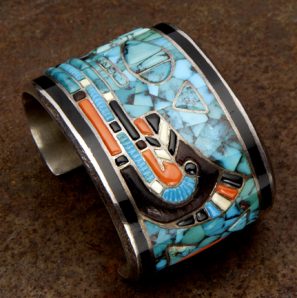