Exhibitions › Jicarilla: Home Near the Heart of the World

Opening June 12, 2016, the Wheelwright Museum of the American Indian will present Jicarilla: Home near the Heart of the World, an exhibition focusing on Jicarilla Apache basketry, micaceous pottery, and beadwork. Planned in collaboration with the Jicarilla Apache Nation, its Arts and Crafts Department, and its Archives Department, and the Center of Southwest Studies at Ft. Lewis College, Durango, the exhibition will feature more than eighty objects dating from the mid-nineteenth century to the present.

For centuries, the Jicarilla have resided along what is now the New Mexico/Colorado border, near what they call “the heart of the world.” By about 1700, when they first appeared in the written records of Spanish settlers in the Southwest, they were renowned traders. Archaeological evidence from nineteenth century New Mexican village sites shows that Jicarillas were responsible for the manufacture of micaceous cookware used throughout the region. Jicarilla beadwork and basketry were traded into the Pueblos. This commerce in crafts forged lasting relationships among the Jicarilla and their neighbors, and was crucial to the tribe’s ability to survive in its traditional homeland.

Home near the Heart of the World will include baskets and beadwork from the Goodman Collection. Purchased by the Jicarilla Apache Nation in 2011, the collection consists of items collected by Hortence Goodman, owner of Goodman’s Department Store in Pagosa Springs, Colorado, between about 1920 and the 1960s. Hortence acquired crafts from Jicarilla customers who frequented her shop, sometimes trading baskets for blankets and other supplies. She tagged many pieces with their makers’ names, and the resulting record provides a means for tracing the history of Jicarilla arts through the first half of the twentieth century.

The exhibition also includes baskets from the Wheelwright’s Joan Anderman and Byron Harvey III collections and from the Center of Southwest Studies at Fort Lewis College, Durango, Colarado; pottery from the Museum of Indian Arts and Culture, Santa Fe; an early parfleche and headdress from the Colorado Springs Fine Arts Center; and beadwork and basketry from an important private collection. A section of the exhibition will be devoted to the Jicarilla Arts and Crafts Department, a tribal enterprise that seeks to encourage and support the perpetuation of traditional arts. Works by more than a dozen contemporary artists will be on display.

Jicarilla Apache woman’s dress and cape. Collection of the Wheelwright Museum of the American Indian. Photograph by Addison Doty.

Carrie Roanhorse with her willow branches.

Examining potential pieces for the show.

Miranda Notsinneh with two of her baskets from the Goodman Collection. 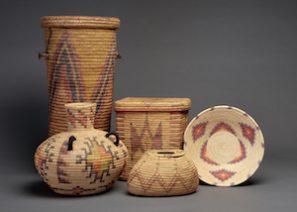