ON DISPLAY ON THE LOWER LEVEL OF MUSEUM

Charlie Willeto was a Navajo artist born in 1897. In the Navajo clan system, his maternal clan was Tódich’ii’ni (Bitter Water) born for his paternal clan, Hashtłishnii (Mud People). Willeto’s father was a medicine man or as Navajos call them “hatałii”, which translates as “singer.” His mother was also a medicine woman. They instilled Navajo healing ways in their son, and he assumed this responsibility for his greater community. Being a hatałii, Willeto traveled throughout the Navajo Nation healing those in need with traditional ceremonies and prayer. Charlie married Elizabeth, who was a Navajo weaver and the daughter of a hatałii, and born into traditional Navajo healing arts. They had six children and lived in a traditional Navajo hogan between Lybrook and Nageezi, New Mexico. Willeto supported his family by working in many different jobs, including railroad worker, silversmith, moccasin maker, and later in life as a renowned woodcarver. Contemporary Navajo artist Shonto Begay said, “Willeto beckoned me to celebrate the unheralded visions of my world, including the pain, we as Diné collectively deny so effectively. We were taught to let go of pain by redressing it in beauty.”

Animals, spirit figures, and people form the body of his work and were painted with designs from Navajo textiles, petroglyphs, and landscapes. Willeto worked with local cottonwood, pine, and sometimes rounded tree trunks, recycled gate posts, and flat boards; he cut and shaped his work by using hand axes, saws, chisels, knives, and hammers. He adorned his carvings with used paint from road work done during the construction of Highway 550 and many times with house paint. His wife Elizabeth, who was also his collaborator, would create natural dyes to be used for both her textiles and Willeto’s carvings. Working together, Elizabeth painted most of the jewelry on Willeto’s figures using dyes, including concho belts, buttons, bracelets, necklaces, and other embellishments.

Willeto’s work is represented in many prominent public and private collections, including the Wheelwright Museum of the American Indian, the Smithsonian’s American Art Museum, and the Museum of International Folk Art, and became the subject of several books. Considered a folk-art master, he was the first Navajo to carve figurines in this manner and his work was deemed revolutionary. Navajos at that time considered carving wood in this fashion as a traditional taboo, because it was only associated with traditional healing. However, in his role as a hatałii, Willeto’s art was used in his medicine and his carving was guided by the Navajo religion.

Trading posts on the Navajo Nation were located throughout the region and provided opportunities for Navajo artists to trade and barter traditional art for necessities like food and clothing. Trading post owners would then sell Navajo art to tourists, who were traveling through the rich Southwest landscape. It was near Lybrook, New Mexico at the Mauzy Trading Post that Willeto’s relationship with trader Jim Mauzy began. Mauzy traded Willeto for his carvings, as they were uniquely different from weavings and jewelry made by other Navajo artists. Mauzy then traded Willeto’s carvings to other traders, dealers, tourists, and collectors. It is believed that Willeto created over four hundred carvings in his lifetime.

Collectors Richard and Willa Sisson said, “We have been absorbed by Charlie Willeto’s art from first sight, its distinctiveness, its authenticity, as if his ‘audience’ was not us, the beholders of his creations, but rather that his audience was simply his own vision and understanding of things that were distinctly his, and expressed in a manner that did not follow formal lines, much like surrealism, and with the use of color as impressionism, the result often being expressive of a certain spirituality. We were and we remain transfixed, his work captivating, inviting us to be and to remain engaged with comfort and with resonance, but at something of a distance. His art, created during the last phase of his life, is indeed a part of the universe of art, regardless of place, regardless of culture. It is hard to let go…But we do so in honor of Jonathan and Linda Batkin for their lasting contributions to the Wheelwright Museum of the American Indian and to public knowledge, appreciation, and love of Native American art.”

Willeto passed in 1964; although his sons Harold and Robin were young at the time of his death, they remember a connectedness with their father’s creations and later became artists as well. Elizabeth continued to carve pieces after his death, initially signing her carvings with the initials of her past husband, and only later to sign with her own initials. Her work and her sons’ work was characteristic and evocative of Willeto’s work. Elizabeth passed in 2011, and her contributions continue to be recognized in her role as her husband’s collaborator. Willeto was an important contributor to the aesthetic of both his family’s art practice and he is recognized for the significant impact his work had on Navajo culture. 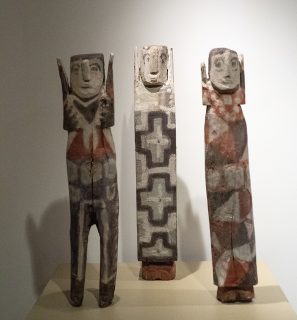