Spoons and other flatware, made for sale to non-native and embellished with stamped and engraved human and animal images, were among the earliest products of Navajo and Pueblo silversmiths. Silversmiths responded to an influx of outsiders — tourists traveling through the Southwest on the new transcontinental railroad — by producing some of their finest and most imaginative work. As Americans indulged a passion for collecting spoons and other fancy flatware, Navajo and Pueblo silver enjoyed tremendous popularity.

“Navajo silverwork came of age at the moment when railroad travel to the Southwest brought artisans and traders into the American marketplace. The Victorian love of cutlery, and the nation’s obsession with commemorative silver merged in the intriguing artistry of Navajo spoons. From the 1880’s to World War II, Navajo smiths brought the highest level of skill and invention to functional teaspoons, servers, and sugar shells. At the same time, the spoons were the canvas for ethnic art. An utterly unique artform, these artifacts are now ardently sought by collectors and institutions, as rare mementos of Navajo artistry and the souvenir trade.”

— Excerpt from Navajo Spoons: Indian Artistry and the Souvenir Trade by Cindra Kline, guest curator for the exhibit.

In addition to exhibiting at the Wheelwright Museum, A Stirring Story: Navajo and Pueblo Spoons traveled to the Center of Southwest Studies in Durango, CO (April 28 through September 3, 2004); the Mennello Museum of American Folk Art in Orlando, FL (October 15, 2004 through January 5, 2005), and Copia: The American Center for Food, Wine and the Arts in Napa, CA (June 3 through August 22 2005). 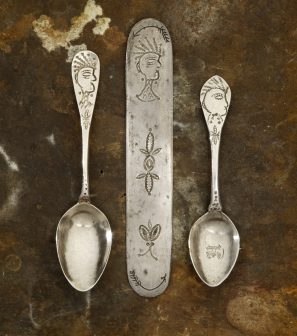