Until about 1865 Navajo weavers produced elegant clothing for their own people and for trade to the Spanish, the Pueblos, and other Native American peoples. Navajo garments were prized for their warmth and the weather-resistant qualities of their weave. In the late nineteenth century Navajo weaving was influenced increasingly by contact and trade with other peoples, especially Anglo-Americans. By the early 20th century the Navajo wove more for exchange with other peoples than for their own use, and they adopted the wearing of commercially produced trade blankets in favor of the elegant textiles they had formerly woven for themselves. This exhibition features beautiful examples of women’s garments, illustrating the influences of contact and trade in the 19th century. 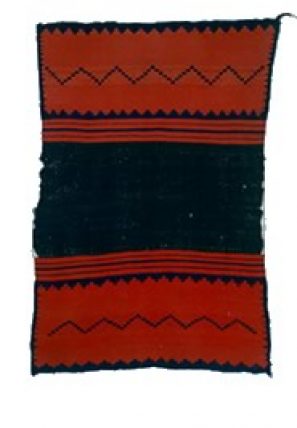