This exhibition exemplifies the active role that Native artists are playing in redefining American Indian portraiture. In outlasting the tropes established by the earliest mass-circulated portraits of Native peoples, Native artists prove resilient as they work to challenge, rectify, and move beyond western themes imposed on the portraiture of Native peoples. These works reclaim the American Indian image and ensure that its redefining comes at the hands of those represented.

In contrast to the often deliberately contrived photographic portraits of American Indians by non-native photographers, ethnologists, and anthropologists in the late 19th and early 20th centuries, these portraits were created from contemporary Native perspectives. The works are imbued with layers of complexity and feature subtle and specific references to foundations in Native life and culture. Inclusive to the roles and significance that life and landscape play in Indigenous existence, they offer more than figures and faces to stand for and reinforce tropes. Instead, just as Native peoples see themselves as constituents of local ecosystems, these portraits assert this connection as inherent to Native identity. With the creation of these portraits, the American Indian image is reclaimed, redefined, and repurposed to explore and give insight to Native perspective and identity.

If you would like to see more, use your Smartphone and text “Wheelwright” to 56512, and following the link! 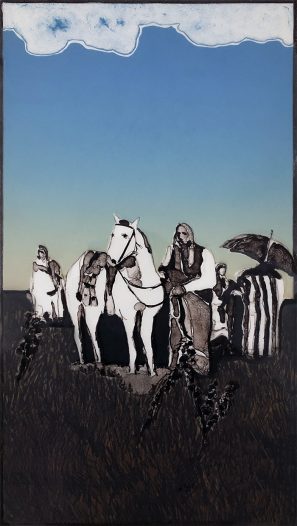