The Wheelwright Museum offers ROOTED: Samples of Southwest Basketry, which explores a small range of Southwest Native American baskets, both traditional and contemporary, and represents important basket-making styles from its collection.

Native American basket weavers have transformed different grasses, reeds, roots, dyes, and sometimes even baling wire into works of art that are unmatched in beauty and complexity. Southwest Tribes use different materials, weaving techniques, basket shapes, and characteristic patterns, illustrating distinct methods and the use of resources based on regional availability. All the differences and similarities in baskets among Southwest Tribes are indicative of the evolution of this art form.

Basketmaking or weaving is one of the oldest known Native American arts. Baskets and the art of basketry have been a part of Native American history for centuries. There is evidence of baskets being made in this region over 8,000 years ago. They were and are still used for utilitarian, and sometimes ceremonial purposes. Baskets are sold commercially and traded amongst Native people. Changes to the environment and the introduction of different cultures also affected the history and development of basket making; environmental changes could alter the availability of materials to weavers, which led to shifts to alternate local or regional materials that were necessary to continue their usefulness. As an example, the availability of aniline dyes in Navajo trading posts allowed basket weavers to incorporate an entirely new medium into their design concepts.

As with most Native American art forms, many cultural traditions were established through basketry. In the late 1800s, Paiute weavers began creating a stylized basket for both sale and trade, and Navajos became the main customers of this basket which were used in Navajo wedding ceremonies. Currently, Navajo wedding baskets are typically woven by both Navajo and Paiute weavers and are one of the few baskets used in ceremonies. They are usually made of sumac, willow, and either natural or aniline dyes. During a Navajo marriage, a new basket is used to serve a traditional blue cornmeal mush to the wedding couple and guests to eat. Typically, after the wedding, the basket is placed in the newlyweds’ home with the opening or “path” of the basket, facing to the east to support the marriage; for Navajos, the baskets are symbolic and are important to both tradition and ceremony.

The process of creating baskets is also important. As an example, the Tohono O’odham people begin with the coil of the basket. Coiling begins with a point in which materials are circularly wound to create a structure and ultimately generate a form. Through pattern building on a set of weaving principles, the weaver can then create a shape they desire. This creative process also connects the beliefs of the weaver to his or her community, specific to material culture, tradition, and Tribal core values. The process of creating a basket is essential for the O’odham people in connecting them with their universe.

Native American Southwestern basketry is known for its incredible innovation and creativity as artists create a conduit to an ancient technique with their unique contemporary vision. 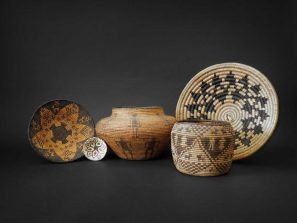