From the exhibition booket, DAN NAMINGHA, written by Suzanne Deats:

The union of opposites is an ongoing fact of the physical universe. It pervades literature, philosophy, and science. It is an underlying element in the art of Dan Namingha, serving as a catalyst for all other the,es.

The world itself is made up of structural dualities, of land and sea, earth and air, fire and water. Night follows day, and seasons tip the proportions of light and dark first one way, then the other.

In one of Namingha’s wood sculptures, titled Cardinal Directions, north offsets south and east balances west. It is two sides of the same equation. One surface is not quite abstract, the other not quite realistic. On one, a kachina is poised in the center of the four directions defined by blue, yellow, red, and white, which are also the colors of native corn. It is anchored in a pool of many colors overlaid with a spiral migration symbol.

The opposite surface of Cardinal Directions expands into the blackness of space, referring to the nadir and the zenith. It pulsates with layers of geometric symbols that barely suggest elements of kachinas.

Throughout Namingha’s art, there is an interplay of orientations: this idea, the other factors, all sources. In a complex, six-sided wood sculpture called Passages, the concept of duality bends and breaks like light through a prism, echoing and reflecting ceremonial symbols. Intermittently, the sacred black and white path of the koshare paces off  a measure of space and time. A thin plane separates two realities, the external boundary of one becoming the interior wall of the other, forming its environment.

The bronze sculptures address the concept of duality in a different way. Positive and negative space play an important role in these works. Namingha suspends fragmented forms within a window that reverses the composition as the viewer move around the piece. To look through the open spaces is to see another dimension, philosophically as well as physically.

Namingha’s two-dimensional work also contrasts ideas that exist in counterpoint to each other. Collages such as Pueblo Symbolism IV and Pueblo Symbolism V deal with internal and external issues and with opaque and transparent meaning. Bold shapes seem to hover in front of the image, against the deep blue of infinity.

Namingha things constantly about the balance between here and there, good and evil, both and neither. “We, as people, are sometimes divided within ourselves,” he notes. “We say one thing and do the opposite. We say ‘never again’ and them do it almost immediately.”

He knows that everything has at least two sides, and that one cannot exist without the other. And so his art inhabits the interface, attracting a tremendous energy to the creation of each piece. His lifelong experience with the rituals of his people and the structural proportion of his land has given him a unique viewpoint, informed equally by his participation in the larger community of international culture.

Namingha draws deeply on his Tewa-Hopi heritage for content, yet he is as innovative as any other mainstream artist who is influenced by the contemporary trends and by the art history of the whole world. He paints vigorously, in an abstract expressionist manner, incorporating attenuated suggestions of traditional figures into his shifting perspectives.

He works in his two worlds, one past and one yet to come, fragmenting and reintegrating them into the here and now., He is at once an insider and an outsider.

Such a cultural class frequently kindles an artistic statement filled with confusion and heat. Dan Namingha has, throughout his long career, risen steadily toward the next level, every simplifying. He sees through the screen of the visible and beyond the boundaries of form. His art generates light.

Photo by Lynn Lown. (From the exhibition booklet.) 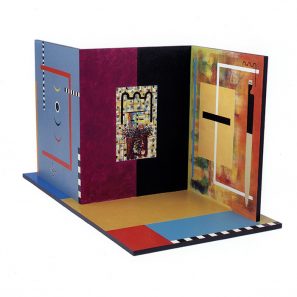