Exhibitions › The Earth, the Moon, and the Stars Above: Benjamin Harjo, Jr.

Ben Harjo’s interest in art began when, as a fifth grader, he entertained classmates with giant drawings of Woody Woodpecker and Elmer Fudd. A dedicated cartoonist, he later sold comic strips to his high school paper, and after graduation was accepted at Santa Fe’s Institute of American Indian Art. After a long bus ride from Oklahoma, Harjo arrived to find that the school had just discontinued its course in cartooning. Nevertheless Harjo stayed and enjoyed access to legendary instructors including Fritz Scholder and Allan Houser. He found a mentor in Seymour Tubis, who encouraged him to look at art forms ranging from the painting and carving of the Northwest Coast to European masters.

While all of these influences appear in Harjo’s work today, his style is unique. In the words of one reviewer, “Although he can be compared to an array of masters, one association remains: Ben Harjo is influenced by Ben Harjo’s work.” Paintings and prints combine vibrant color with seemingly animated geometric, human, and animal forms. Many are inspired by Native American stories or natural objects (“It could be a leaf, a rock, even a piece of mud,” he says); most reveal Harjo’s irreverent sense of humor.

The first major retrospective on the work of Seminole/Shawnee artist Benjamin Harjo, Jr., The Earth, the Moon, and the Stars Above features more than 60 paintings, monotypes, woodcuts, and miniatures. A 49 page, full color catalog is available in the Case Trading Post. 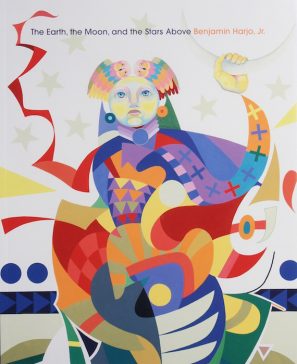