Exhibitions › The Man Made of Words and Images: N. Scott Momaday

From the Fall 1992 issue of The Messenger, the Wheelwright Museum’s former tri-annual newsletter.

Almost everyone is familiar with the writing of Kiowa author N. Scott Momaday. His stunningly written first novel, House Made of Dawn, gave the public a look inside modern Indian life through Indian eyes. House Made of Dawn won the Pulitzer Prize in 1969 and is still widely read. During the past 30 years, his output of writing has been steady: essays, poetry, plays, autobiography, and fiction. He hold a master’s degree in creative writing and a doctorate in English and American literature from Stanford University, and has had a distinguished career as a professor.

Not everyone knows of Momaday’s visual art. Begun in 1974 when he was a visiting professor in Russia, his drawings, monoprints, etching and watercolors take the themes put forth in his literary works into the visual dimension. Many of his artworks depict people. Just as he skillfully describes the haunting moodiness of a character in a book, so he delineates a person on paper: one can sense that he has meditated on his subject and seeks to portray the life-force, the depth of the subject.

Momday draws those he has known, and sometimes those known to him only through literature and history. The Jungian term archetype comes to mind when viewing the images of the Kiowa child and the buffalo, and his interpretation of the Lakota holy man Crazy Horse, who was never photographed. Other themes he has gone into deeply over the years, both in words and images, are concerned with the western antihero Billy the Kid, and medicine bags in the shape of a baby bear. More recently, he has become fascinated with Plains Indian shields. After researching the originals, he began drawing and etching shields, and creating prose-poems to go with them from his store of legends he head in childhood and from his archetypal imagination.

A new interest, developed through former ones, is in the nature of the sacred. Momaday would like to start a foundation to oversee sacred lands, some perhaps in the Rainy Mountain area of which he has written, perhaps with a conference and retreat center where those of like mind can meet. Another project, which is just reaching completion with the opening of the exhibition, is the book In the Presence of the Sun: Stories and Poems 1961 – 1991, published by St. Martin’s Press. It contains poems and drawings,and a section entitled In the Presence of the Sun: A Gathering of Shields (first published in a limited edition by Rydal Press of Santa FE) which contains a full suite of shield drawings and accompanying stories.

THE MAN MADE OF WORDS AND IMAGES unites the two strands of Momaday’s career: writing and visual art, both of which spring from his sensibility as a poet. The exhibition brings that sensibility into the public eye, on a large scale. 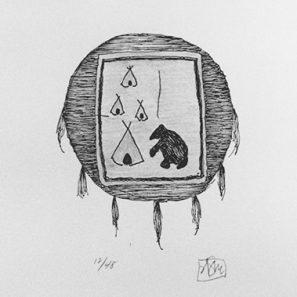