Long valued for its artistry, pottery from Zia Pueblo was traded throughout the Southwest. During the early 1900s, when epidemics of influenza and smallpox had taken their toll on the pueblo, about 20 potters literally saved the people of Zia from starvation by making jars and bowls for barter and sale. But in spite of its importance to the pueblo, Zia’s pottery has received little attention from scholars and collectors. Two Bureau of Ethnology reports on Zia, one in 1894 and another in 1962, contain only brief discussions of pottery. Under the auspices of the Smithsonian Institution, several hundred specimens of Zia pottery were collected between 1881 and 1887, and between 1899 and 1911 Zia pottery was collected for the American Museum of Natural History. Although some of these examples appear to have been new at the time, in neither case were their makers were identified.

Beginning in [when?] Dwight Lanman and Frank Harlow conducted research to identify the potters responsible for Zia’s remarkable artistic legacy. Working with collections at the School of American Research and the Museum of Indian Arts and Culture, they identified seminal work by well-known potters, and attributed pieces to 40 potters active during the first half of the twentieth century who until now have been virtually anonymous outside the pueblo.

The Wheelwright’s exhibition, based on Lanman and Harlow’s book, The Pottery of Zia Pueblo, brings together more than ** works by Zia’s master potters. Among those whose work is prominent in the exhibition is Trinidad Gachupin Medina (ca. 1880–1969), who was recognized in her lifetime as one of the great Pueblo potters. From 1930–1946 Medina toured the United States with trader Wick Miller, demonstrating her craft in department stores and at expositions such as Chicago’s 1933 Century of Progress. Also included are Rosalia Medina Toribio (ca. 1858–1950) and Reyes Ansela Shije Herrera (ca. 1865–1957) who in the 1880s were called “the cleverest artists in ceramics in Sia.” Although she is largely forgotten today, prior to 1940 Toribio was mentioned by scholars as possibly the best potter at Zia. Herrera was a prize winner at Santa Fe Fiesta in 1924.

Through vintage photographs, richly interpretive text, and the ceramics themselves, the exhibition reveals the identities off Zia’s master potters of the late nineteenth and early twentieth centuries. Their descendants are represented as well, bringing one of the great Pueblo pottery traditions into the present. 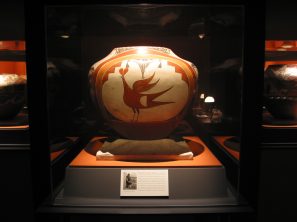