During the past ten years the Wheelwright Museum has made remarkable progress in strengthening its collections of Navajo and Pueblo jewelry and related traditions, southwestern textiles and basketry, Navajo folk art and pottery, and ceramic figurines from Cochiti Pueblo. This year the Wheelwright celebrates the seventieth anniversary of the completion of its historic building with two exhibitions that honor the donors who have so generously supported its acquisitions program.

Tradition and Tourism, 1870–1970 features more than 400 objects, most of them acquired during the past decade. The exhibition focuses on objects made by Navajo, Pueblo, and other native peoples of the Southwest for non-native markets. Since 1996 the Wheelwright Museum has built a unique collection of what is generally referred “tourist” silver—jewelry, tableware, and other items made by Navajo and Pueblo craftsmen, both on the reservation and in commercial shops, for sale to Anglo consumers. Featured in the exhibition will be whimsical, beautifully crafted bracelets, pins, spoons, shoehorns, boxes, and miniatures, dating from as early as the 1880s. Also included will be stunning examples of New Mexican gold and silver filigree. Beginning in the 1870s, shops in Santa Fe, Albuquerque, and Las Vegas produced delicate jewelry of intricately twisted gold or silver wire. Marketed to visitors as a traditional Mexican art form, filigree was often made and worn by Pueblo peoples. The Wheelwright’s collection of locally produced filigree is one of the most important in any museum.

In addition to jewelry, Tradition and Tourism will present several remarkable Navajo textiles. One, dating from the 1870s, may have been made for trader Thomas Varker Keam. The design of this large blanket resembles a Civil War-era military guidon (Keam was a veteran of the California Volunteers), and in the center of the design are the letters TVK. A large, exuberantly colored rug was purchased from trader Cozy McSparron of Chinle in 1937. In 1920 museum founder Mary Cabot Wheelwright visited McSparron with a proposal that they work together to improve dyes available to Navajo weavers, in an effort to enhance the marketability of their textiles. The rug is thought to be a result of their collaboration.

Other recent acquisitions include important collections of Pima baskets, Jicarilla Apache baskets, Zuni fetishes, Navajo pottery and folk art, and Cochiti ceramic figurines, all of which will be represented in the exhibition. Among the artists to be featured are silversmiths Awa Tsireh (Alfonso Roybal) and Austin Wilson; Zuni fetish carvers Leekya Deyuse, Theodore Kucate, and Teddy Weahkee; and Cochiti potter Damacia Cordero. Tradition and Tourism opens to the public on May 27, 2007 and will run through October 21, 2007. 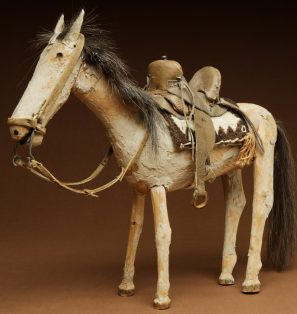