From May 11, 2014 through June 8, 2015 the Wheelwright Museum presents a survey of works by Diné photographer Will Wilson.

The exhibition will include the six original large-scale images from Wilson’s AIR (Auto Immune Response) series, and selections from his CIPX (Critical Indigenous Photographic Exchange) project.

Born in San Francisco, raised on the Navajo reservation, Will Wilson combines digital technology, historic photographic processes, performance, and installation to address the themes that most concern him: environmental activism, the impacts of cultural and environmental change on indigenous peoples, and the possibility of cultural survival and renewal.

Wilson has described AIR as having “focused on a post-apocalyptic Navajo man’s journey through an uninhabited landscape. The character in the images is searching for answers. Where has everyone gone? What has occurred to transform the familiar and strange landscape that he wanders? Why has the land become toxic to him? How will he respond, survive, reconnect to the earth?” A futuristic hoghan—the traditional Navajo home and conceptual center of the universe—serves as a research facility and laboratory as the “protagonist,” portrayed by the artist, conducts investigations into the harsh realities he must face.

With CIPX, Wilson simultaneously critiques and expands upon the work of Edward S. Curtis. Between 1907 and 1930, Curtis published a twenty-volume work, The North American Indian, in which he attempted to document Native cultures before they vanished in the wake of American expansion. Wilson admits to having “a fair amount of respect for Curtis’s project and the endeavor he undertook,” while being “impatient with the way American culture remains enamored of one particular moment in a photographic exchange between Euro-American and Aboriginal American societies. For many people even today, Native people remain frozen in time in Curtis photos.”

Wilson “resumes the documentary mission of Curtis from the standpoint of a 21st century indigenous, trans-customary, cultural practitioner.” Using a 140-year-old lens and the collodion wet-plate process—the process that Curtis used—he sets up a dialog with his subjects, who are asked to bring an object of personal significance to their sittings. The subject receives the original tintype portrait, and in exchange, Wilson makes a high-resolution scan and receives permission to use the image in his work. “I often tell my collaborators half-facetiously that there has been a soul transfer, that soul resides in the tintype and I don’t want to possess that, only a facsimile of it.” 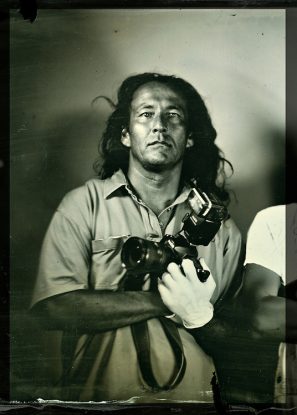