Blog › Museum News › An Illuminating Visit by a Maine Basketmaker 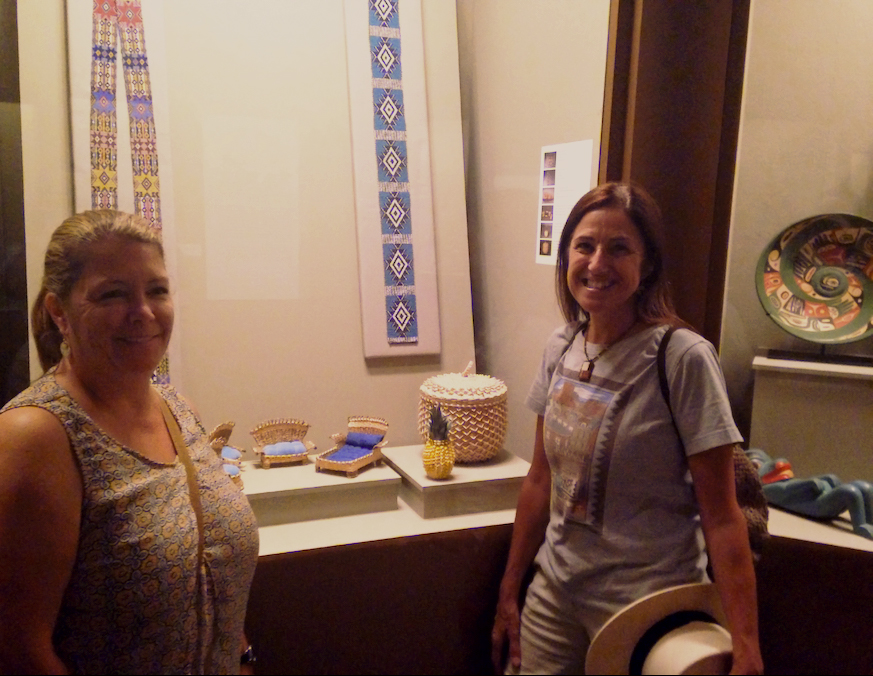 Penobscot basketmaker Theresa Secord with her cousin Jill Tompkins on a visit to the Wheelwright Museum. Pictured at the bottom of the case are works by three of the founders of the Maine Indian Basketmakers Alliance.

In August, we were pleased to have a visit from renowned Penobscot basketmaker Theresa Secord and her cousin Jill Tompkins, both of whom connected with several pieces in our current exhibition Connoisseurship and Good Pie: Ted Coe and Collecting Native Art, presented in collaboration with the Ralph T. Coe Foundations for the Arts.

The exhibition includes woven ash work by Passamaquoddy artists Sylvia Gabriel (1930-2003), Clara Neptune Keezer (born 1930, a National Heritage Fellow) and Theresa Neptune Gardner (1935-2004), all of whom are founding members of the Maine Indian Basketmakers Alliance (MIBA), which represents work by the Maliseet, Micmac, Passamaquoddy, and Penobscot tribes. (Secord and Tompkins are also founding members of the organization.) On display in one of the cases is a beautiful “porcupine” basket made by Sylvia Gabriel, a charming set of doll house furniture made by Clara Neptune Keezer, and a small pineapple basket made by Theresa Neptune Gardner.

MIBA is significant for the work it has done to promote basket making among the tribes in Maine, as well as for the recognition it has brought to their artistry in the wider Native arts world. In the 20 years since its founding, MIBA has increased its membership to 200 members, and has lowered the average age of its membership, bringing a number of younger artists into the fold. This year at the 2015 Santa Fe Indian Market, eight Maine Indian basket makers were represented among the artists.

One notable artist is Jeremy Frey (Passamaquoddy ), who won Best of Show at both the Sante Fe Indian Market and the Heard Indian Market and Fair in 2011. “Jeremy Frey has made famous the ‘porcupine’ weave that is on Sylvia’s basket. He learned this weave from his mother, who learned from Sylvia in the MIBA Traditional arts apprenticeship program,” reveals Theresa Secord.

Theresa emphasizes that these three artists in the show — Sylvia Gabriel, Clara Neptune Keezer, and Theresa Neptune Gardner — had “a profound impact on next-generation basket makers” and are responsible for the flourishing of Maine Indian basketry today. “The colorful designs in some of the younger members’ work, who just won awards, like Sarah Sockbeson and George Neptune, and the fanciful woven fruits and vegetables were pioneered by Clara and her sister, Theresa.”

After touring the Wheelwright Museum, Theresa and Jill headed over to the Ralph T. Coe Foundation with Bruce Bernstein, who worked with Secord on a basketry exhibiton at NMAI in 2003, The Language of Native American Baskets: From the Weavers’ View. While at the Coe Foundation, Secord had a revelation about Coe and his connection to the Maine Indian basketmakers. “When I saw all of the baskets there, it was clear to me that Ted had been coming to the MIBA markets that we had put in place in Maine… and in his own way, by collecting the pieces, was supporting and validating our art and artisans!”

Thank you to Theresa Secord and Jill Tompkins for stopping by and sharing your personal insights with us!

To see Theresa Secord’s work, visit her website at www.wikepibaskets.com and read her recent feature in the September-October issue of Design New England magazine.