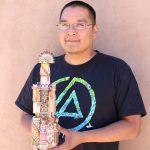 Bryant Mavasta Honyouti, the son of Ronald Honyouti, is a skilled Hopi katsina carver who lives in Hotevilla, Third Mesa. His work is finely carved and demonstrates a refined sensibility of color. In addition to three-dimensional works, Mavasta carves scenes in low-relief as part of his plaque collection. Mavasta has won a number of awards, including Best of Classification at...read more