Benjamin Harjo showed for the first time at Santa Fe Indian Market in 1983. Years before he had begun his formal art training at the capital city’s Institute of American Indian Arts (IAIA). The year he arrived at IAIA, Ben was disappointed to learn the school had dropped their cartooning classes, a career Ben had dreamed of pursuing since his high school days of drawing cartoons. The joyous color, exuberant composition, and humor of his mature work hearken back to his fascination with cartoons.

Ben grew up on his grandparent’s farm in Oklahoma. He completed two years at IAIA, where he studied design and color with Seymour Tubis. He received a bachelor’s degree in fine arts from Oklahoma State University at Stillwater, after a two-year stint in Vietnam. He took on a variety of art-related jobs and continued to paint. His reputation grew, and eventually he became a full-time artist.

A vairety of two-dimensional media express Ben’s particular visions. He works in goache on watercolor paper, conte crayon, pen and ink, and especially, woodcut. The bold color of his work is closely contained and formally ordered within his free compositions. He uses geometric patterns, often incorporating hands and faces into his pictures. His imagery contains clear echoes of Seminole, Navajo, Plains Indian, and Northwest Coast designs, but also frequently references international themes and art forms. Along side his full-size pieces, Ben has a tradition of creating miniature works along with his full-size pieces.

Of his often interpreted work, Harjo says, “I do legends and stories, or I make up my own after the painting is done. Sometimes people find images in my painting that I didn’t put there. I wonder, how did they get there?” 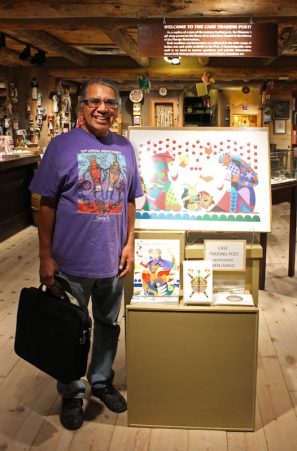