In about 1880 potters of Cochiti Pueblo began making large standing figures of circus performers, cowboys, merchants, and other outsiders who, with the coming of the railroad, encroached increasingly on the Pueblo world. Made by the traditional coil-and-scrape method, these expressive and frankly satirical figures were masterpieces of design and execution, standing as tall as 30 inches without support. At the same time potters of Tesuque Pueblo developed their own tradition—smaller, seated figures that became known as Rain Gods. Both figurative styles were marketed aggressively by curio dealers in shops and via mail order, and before their popularity waned in the 1930s, they found their way into collections throughout the United States and Europe.

Clay People, a collaborative exhibition developed by a team of artists and scholars, presented both historic and contemporary views of Pueblo Indian ceramics inspired by the human form. Seldom seen, century-old masterpieces from Cochiti and Tesuque Pueblos revealed the imagination and skill of nineteenth and early twentieth century potters. Installations and videos by contemporary potters Nora Naranjo Morse and Roxanne Swentzell of Santa Clara Pueblo, and Virgil Ortiz of Cochiti Pueblo, brought the tradition into the present.

This exhibition was reviewed and praised internationally.

A 96-page catalog, edited by Jonathan Batkin and with essays by Nancy Marie Mithlo, Jonathan Batkin, and Patricia Fogelman Lange, is available in the Case Trading Post. 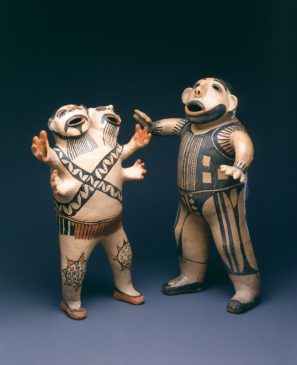