America Meredith is an enrolled member of the Cherokee Nation who also acknowledges Swedish and Celtic ancestry. Inspired by sources ranging from medieval miniatures to Cherokee and Japanese syllabaries, she paints portraits of friends, family, and historic figures that confound stereotypes and challenge assumptions about Native identity. Because of their skill at navigating between traditional cultures and mainstream society, she sees tribal people as “the future, not the past, in our globalized world.” A resident of San Francisco, she tied for Best Painter of 2006 in the San Francisco Weekly’s annual poll. Nevertheless her work speaks first to her own communities: she always shows it in her native Tahlequah, Oklahoma, “so if there’s something wrong they’ll tell me.” Meredith is dedicated to the idea of art as communication. “For me art’s the vehicle,” she says. “I don’t do art for art’s sake. I do art specifically to talk about Native American issues. That’s the only reason I’m an artist.” 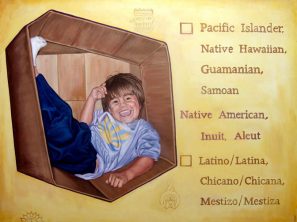