Exhibitions › It’s in the Details: Kenneth Williams and Orlando Dugi

Kenneth Williams (Seneca/Arapaho) and Orlando Dugi (Navajo) are among the leading contemporary beadwork artists—Williams working in styles inspired by his ancestry and pop culture, and Dugi creating contemporary fashion and accessories in or accented with beadwork. Both artists have received numerous awards for their work; Williams was awarded Best of Show at the Heard Museum Guild Indian Fair and Market in 2014. It’s in the Details: Kenneth Williams and Orlando Dugi presented more than thirty examples of their highly detailed work.

From the Intro in the catalog, available through the Case Trading Post:

Ken Williams (Arapaho/Seneca) began observing and experimenting with beadwork when he was about six years old. At his father’s home on the Cataraugus Seneca Indian Reservation in western New York, Ken and his older brother, noted ledger artist Dallin Maybee, learned the techniques of beading largely through trial and error. Starting with basic forms such as necklaces, earrings, and miniature pouches, which he sold locally, Ken developed his skills on his own until he was about thirteen.

As a teenager Ken moved to Utah and began to spend time with his mother’s family, the Spoonhunters, on the Wind River Indian Reservation in Wyoming. They had long been regarded as master beadworkers, and their influence and guidance came at a pivitol time for the young artist. With their support Ken attempted bigger projects such as dolls, bags, cradleboards, and moccasins. His uncle Robert Spoonhunter and his aunt Agnes Spoonhunter Logan were important role models who inspired Ken to pursue beadwork as a serious endeavor. He resolved to master the craft, not only as a potential career, but also as a way to reflect well upon his family’s reputation.

In the spring of 2007, Ken graduated from Santa Fe’s Institute of American Indian Arts (IAIA) with a Bachelor of Arts degree in Museum Studies. While there he studied traditional beadwork with artist and instructor Teri Greeves. He says, “Teri encouraged me to discover my own style, and in many ways she brought me out of my shell. The aesthetic energy in the interplay between traditional beadwork and my contemporary point of view became clear. She helped instill confidence that came from recognizing who I am and where I’ve been, and realizing that my future is full of possibilities.”

Ken’s current work displays a modern style, firmly rooted in his traditional upbringing. One of his primary interests is in fancy bags of all kinds — handbags, shoulder pouches, traditional pipe bags and mirror bags, and delicate pictorial purses. His pieces tell stories and build memories, not only for himself and his family, but also for those newly attracted to his work. “As I look toward the future,” he says, “I’m proud that my beadwork will continue to evolve, just as the traditions before me have done.”

Orlando Dugi (Navajo) remembers when, at an early age, he watched his grandmother and father doing beadwork. He began to emulate them, making pieces for his family and himself. Originally from Gray Mountain, Arizona, Orlando dreamed of traveling to New York, Paris, and Rome, where he would attend operas, balls, and galas. He recognized a similarity between the elegantly dressed people who attended those events and members of his own community, dressed in their finest to go to town or to a ceremony. He believes in the Navajo value of “dressing for the Holy Ones.”

Today Orlando designs and makes hand-beaded eveningwear and accessories. His imagery is lifelike, cutting edge, and amazingly precise, focusing on floral motifs, birds and animals, the human physique, and abstract designs. He works by stitching one bead at a time, using the smallest beads combined with fine materials such as silk and velvet, exotic leathers, crystals, feathers, gold, silver, and gems. Elegance and style are evident in everything he creates.

Orlando was encouraged and honored in 2010 when his first gown won a First Place award in the Contemporary category at the Southwestern Association for Indian Arts (SWAIA) clothing contest. In January 2011 he gave himself three moths to learn silversmithing. By March he had learned enough to add silver to a beaded handbag, and then to start making jewelry. He eventually wants to learn goldsmithing as well. In 2009  he had his first art show, and at that time he decided to step away from traditional Native American clothing and accessories and instead express his passion for beauty, elegance, and luxury through fashion.

Orlando is tuned into a contemporary aesthetic that blends traditional techniques with modern style. He is inspired by the work of Charles Frederick Worth, Louis Vuitton, Yves Saint Laurent, Prada, and many more. As he explains, he would like to push his craft to the limit, the way the amazing clothing makers of the Renaissance pushed themselves and their work. 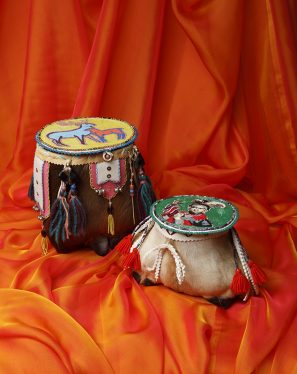